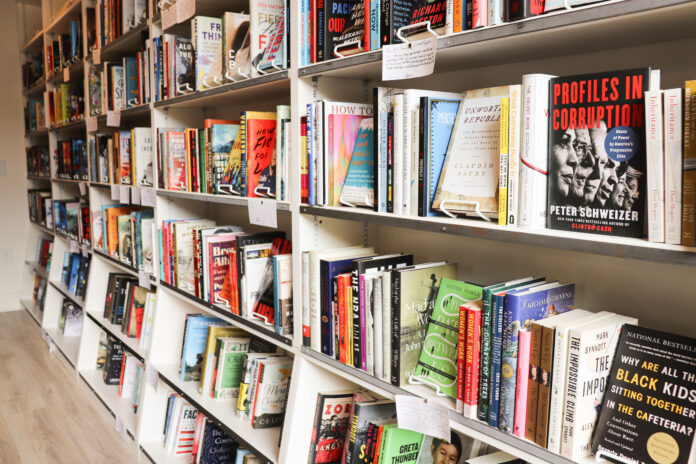 Holidays bring families together — and they should bring communities together, too.

Behind the counter at Auburn Oil Co Bookstore are members of the Auburn community. The bookstore is located in the heart of downtown Auburn and is still standing strong despite the challenges of a worldwide pandemic.

The campaign allowed people to buy t-shirts with the slogan “Keep Auburn Rolling,” and the proceeds were donated to local businesses.

“Auburn Oil Company Booksellers is more than just a bookstore,” said Angela Wilhite, the manager of the shop. “We have a beautifully curated selection of adult books; fiction and non-fiction; southern lit; a great kid’s section for the littlest readers to teenagers; we have poetry and classics.”

The bookstore has been in Auburn a little over a year, but they sell a lot more than books. In addition to books and coffee, patrons find the store full of candles, notepads, dish towels, stickers, bags, keychains and more.

“We’re really kind of like a one-stop shop,” Wilhite said.

Wilhite has been working at Auburn Oil Co. Booksellers since it opened. This will be the second Christmas season for the shop.

The bookstore opened a month before Black Friday, so she said it is hard to know what a typical holiday shopping season will look like for Auburn Oil Co Booksellers.

Crowds started picking up as early as October this year, however, Wilhite said, even if only slightly.

There are several items that are popular in the shop, including some bath bombs from Old Whaling Company, she said. The same company also has a tea towel for sale that reads, “Love you to Auburn and back.”

“All of our booksellers who work here love to read; we have great recommendations, and we really take the time to listen to our customers and hear their likes and dislikes,” Wilhite said. “And then we will walk around the store and find you a stack of books that you can choose from. And Amazon’s not going to do that for you … You’re supporting real people who live in your community when you shop here.”

When Russell Baggett moved to Opelika in 2015 with his wife, he quickly learned that there were not a lot of options for records in the area.

He decided the responsibility was in his hands and opened 10,000 Hz Records.

“We wanted to fill the void,” he said. “And so we opened a shop that was more oriented toward selling current music and of course, [we] have used vinyl too. And so new vinyl, used vinyl, turntables, accessories.”

10,000 Hz Records (717A 1st Ave, Opelika) opened its doors a little over two years ago, but they were doing business before they had a brick-and-mortar building. They held pop-up shops with other businesses around town — finding ways to get music in people’s hands.

Like all local shops, the pandemic hit the business back in March. The doors closed and everything went online, Baggett said.

“We made the decision to close pretty quickly,” he said. “I think we might have closed before anybody else did in Opelika, possibly Auburn too.”

“If people want to shop with us, I mean certainly they can go through our website, through 10000hzrecords.com, buy stuff there,” Baggett said. “They can pick up at the shop … They can either call ahead if they place an order on the website. They can call ahead; I can leave things outside for them to pick up. So, totally contactless that way. People sometimes will knock on the door and just want to order something on the spot which we can certainly do that too. We have been, since March 15, doing free, local delivery for Opelika and Auburn, so we’ve been dropping a lot of packages at people’s doors.”

Baggett said there are a lot of businesses that could not move online when the pandemic began and may not last through the end of it.

“If you want to see unique businesses continue to exist in downtown Auburn, in downtown Opelika, you have to support them,” he said.

Candles are a common gift to give at Christmas, but they are often not seen as a personal gift. Auburn Candle Company, however, allows you to give a candle and personalize it.

The company opened exactly one week before lockdown hit Lee County, March 21, and despite the struggles, they have succeeded in the community.

Auburn Candle Company (166 N Gay St, Auburn) pours all its candles in its shop on Gay Street. What makes them unique is the option to “create your own” candle.

The company gained a large following after making it big on the social media app TikTok.

“We spent [a couple of days] and we made a couple videos for TikTok and posted those and those actually exploded over night,” Bowden said. “We weren’t on TikTok before. I think the first video we posted got almost half a million views. The next one had 1.2 million views. So it’s brought us a lot of business and a lot of people in the Auburn area were really excited to come and check us out.”

Since the shop had to close to in-person customers at the start of the pandemic, the TikTok following helped to kickstart the business.

Even online, customers could still choose their own fragrances without actually being in the store. The “create your own” tab allows customers to pick the size of their candle and then a mix of three scents (from a list of 85).

You could mix and match vanilla bean, orange zest and mango or perhaps bacon, bourbon and old books.

“They can leave notes to kind of say ‘Hey, if I want a candle that’s Georgia peach, mango and champagne,’ if they want more mango than Georgia peach or champagne or something like that, they can definitely leave us notes and we can try to tailor it as best as we can to their requests,” Bowden said.

Some of the most popular scents are Georgia Peach, Lavender and Eucalyptus he said. A lot of the male customers like Bourbon and one of the scents called ‘mug and brush.’

“Tiffany’s favorites are, we have one called lava, which is very similar to like the Capri Blue volcano candle,” Bowden said. “So that’s her favorite. My personal favorite mix is a mix of bourbon, amber musk and sandalwood.”

There are scents too that are a little off the beaten path, like yuzu, which is an Asian citrus scent, or wasabi.

The shop is open again to the public except for on Mondays and Tuesdays.

“I would definitely encourage people to shop locally because I think it’s important to keep your money in the community in which you live in,” Bowden said. “We hire only local students and local people. You’re just reinvesting in your own community.”