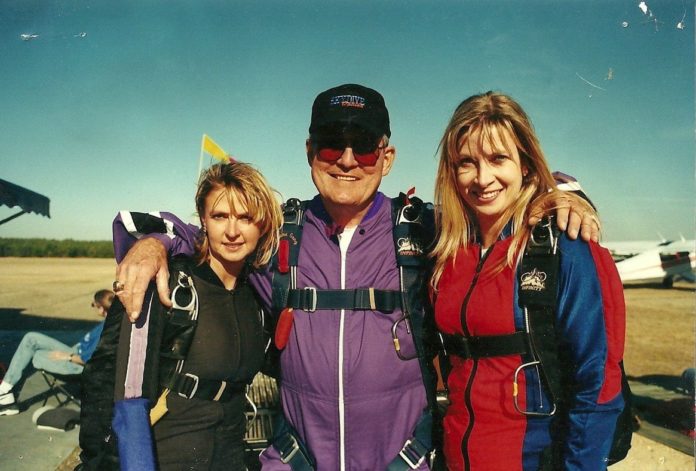 For Pepperell native and retired Command Sgt. Maj.  Charles “Buddy” Blue, the July 4 holiday is not only an occasion to celebrate the nation’s birthday, but honor and respect America’s military members.
“Just don’t ever forget those who served, and those who are,” Blue said.
Blue’s official military career began when he was 17 years old, enlisting in one of Opelika’s two units of the Alabama National Guard, Headquarters and Headquarters Company of the historic 167th Infantry.
Actually Blue’s interest in the military stems from his high school days at Clift High School. Junior ROTC was mandatory for all boys and Buddy was an enthusiastic participant.
“There was this big Airborne Ranger that was my idol in high school (Master Sgt. Basil Collins), and he was our ROTC instructor. He made an impression on me that stayed, and made me want to join the military,” Blue said.
Shortly after joining Opelika’s National Guard unit, Blue and his comrades were called into active state duty to help restore law and order to Phenix City following the assassination of Alabama’s attorney general-elect and a general breakdown of civil order.
Phenix City was known at the time for its high crime rates, gambling, prostitution, murders and a nickname of  “the wickedest city in America”by then  U.S. Secretary of War Henry Stimson.
“It was scary, super scary, for a 17 or 18-year old private,” Blue said, speaking on his experience of helping enforce martial rule in the city. “We were there for three weeks … and then things finally started to level off.”
In 1961, Blue left the Opelika unit and joined the 20th Special Forces Group in Birmingham and became a member of their airborne program. Already an experienced pilot, he would also become a top-notch parachute specialist, both skills that would play an important role later in his life.
During his early years with the Special Forces, Blue was a part of the desegregation of Alabama’s schools and universities, and served as one of Martin Luther King Jr.’s bodyguards during the historic Selma March.
Blue participated in a number of exciting and dangerous activities that are still classified top secret or above the he, or no one else can talk about. Some “never happened” officially and the public will never hear about them. Thank you, CSM (ret.) Charles “Buddy” Blue. America thanks you.
In addition to his military service, Blue completed education degrees from Auburn and Troy universities that enabled him to teach air conditioning and refrigeration courses at Opelika Trade School (later to become Southern Union State Community College) for 28 years.
Blue also played a key role in growing the area’s parachuting community, starting clubs in Opelika and Auburn as well as his own business, Skydive Opelika, in the mid-1980s. He trained both enthusiasts and military personnel alike, many of whom would go on to become a part of the Army’s Golden Knights parachute training and demonstration program.
In 1990, after 37 years of service, Blue retired from the National Guard, and focused on his business and teaching career.
After more than 10,000 jumps and 40-plus years of participating in Opelika’s annual Freedom Celebration, the 81-year-old Blue is fully retired, and finds excitement in deer and turkey hunting. He made his last Freedom Celebration jump three years ago, at the age of 78.
Reflecting on his life spent serving the country he loves, Blue said he believes a military career is a risk well worth the reward.
“I encourage any kid thinking about joining (the military) to do it. You grow up fast in the military … without it, you miss out on the growth that it can provide you … it was  very rewarding for me,” Blue said.
Blue and his wife, Dianne, now make their home south of Opelika, in Beauregard. They have three children and six grandchildren.