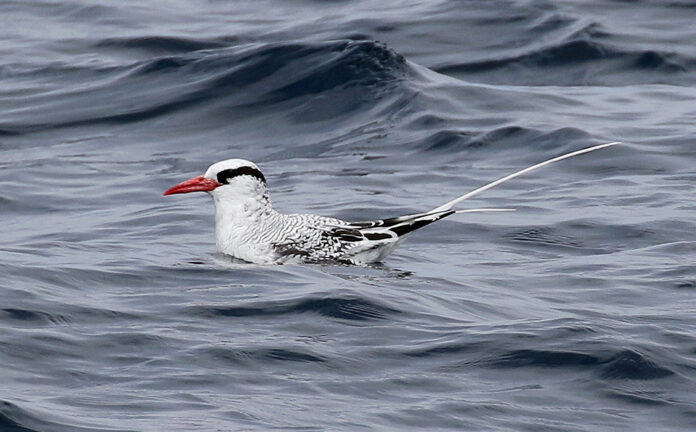 A very rare red-billed tropicbird fell out of the sky in Opelika from the remnants of tropical storm “Zeta” on Oct. 29.

Jeananne Allgood was leaving her office when she noticed something white fluttering down, which she initially thought was a piece of paper. Then she realized it was a bird that had “hit the ground with a thud.” Seeing that the bird was alive but exhausted, she placed it in a box and took it to her home.

Unable to identify the bird and not knowing how to care for it, she contacted her friends for advice. Local birders Rodney McCollum and Lew Scharpf realized that the bird was red-billed tropicbird, a highly rare visitor to the area. Dr. James Holmes, an expert birder, confirmed the identification.

The bird is about the size of a gull and is white in color with black barring on its back and black wingtips. It is a graceful seabird that ranges widely in the tropical and subtropical areas of the Pacific and Indian Oceans and typically nests on rocky islands in tropical seas.

It has an orange to red bill and a long tail with streamers that often take the form of a “V” when in flight. In North American waters it has been found far off the coast of California, where it may be a rare but regular visitor more than 100 miles from land.

Even though it wanders great distances away from its nesting islands, this is the first documented sighting of the species in inland Alabama. According to Dr. Greg Jackson of the Alabama Bird Records Committee of the Alabama Ornithological Society, this is the first inland Alabama tropicbird record. There are two red-billed records for off-shore, and two old “tropicbird species” records.

Attempts were made to feed and provide the bird with live minnows and water, but it would not eat or drink. With the help of birder Dr. Jim Holmes, a wildlife rehabilitation organization in Mobile Alabama was contacted and agreed to receive the bird in the attempt to rejuvenate it.

Unfortunately, the bird died before it could be transported to Mobile. The deceased bird was provided to Dr. Geoff Hill, professor, Biological Sciences and Curator of Birds at Auburn University. The bird will be placed in the university Museum of Natural History.

This bird spends most of its life flying over the open ocean, plunge-diving for fish and squid. It is rarely seen on land, and for good reason; it cannot stand upright or walk because its short legs are set too far back and its feet are paddle-shaped. It has to use its long wings to push itself forward on its belly.

According to the International Union for Conservation of Nature, the global populations of the Red-billed Tropicbird are currently stable. However, Birdlife International reports that some populations of the bird, such as the Caribbean breeding colonies, are threatened due to predation by cats and rodents. Birdlife concludes that it is “precautionarily suspected to be undergoing a small decline.”

Given that this tropicbird is a highly sought-after species for birders’ life lists, its visit to Opelika was indeed a very special event.