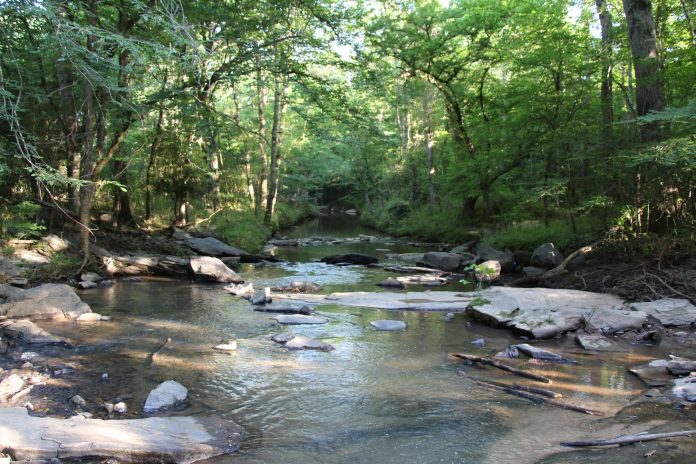 Maintaining a clean, safe and drinkable water supply for generations to come is the goal of City of Opelika Storm Water Coordinator John Harris and his team.
Harris, an Anniston native, has nearly four decades of experience in the conservation field.
Since coming to Opelika in December 2015, Harris noted that trash and littering are the biggest current threats to the city’s water resources.
“Opelika has a significant and serious trash problem. We’ve tried several things (that haven’t worked), but we’re going to continue planning programs and initiatives to try and change that,” Harris said.
Following is a breakdown of the history of water conservation in the U.S. and more detailed information outlining Harris’ daily duties and responsibilities.
History of U.S.
water conservation
American conservationists and historians point to the Clean Water Act (also known as the ‘Federal Water Pollution Control Act) as America’s first major stride to water conservation efforts. Originally passed in 1948, the law was completely rewritten and revamped in 1972 to mirror environmental challenges faced during that time.
As it is currently written, the law is regulatory in nature, mostly concerned with preventing water pollution.
It seeks to retain, conserve and preserve America’s water supply by pinpointing pollution sources, enable publicly owned water treatment facilities to improve their product quality and maintain the stability of wetland areas for both its plant and animal life.
The U.S. Environmental Protection Agency is the federal entity responsible for ensuring the continual pursuit of these objectives by working with state, tribal and local governments.
Alabama Department of Environmental Management
Created in 1982, ADEM is the Alabama branch of the EPA. It is responsible for enforcing EPA programs, procedures and rules at the state level.
One of its main priorities is the proper care and management of storm water through an initiative called MS4, or the Municipal Storm Sewer System program.
The program breaks down municipalities into two phases for program purposes: Phase I for cities with 100,000 citizens or more and Phase II for cities with 50,000 citizens or less. The state combined the cities of Opelika and Auburn into Phase II municipalities.
Under this classification, ADEM rules state that cities are required to create, draft and implement their own stormwater management plan (SWMPs), which among other items addresses pollution problems within that municipality, allows the monitoring of construction sites and industrial areas to ensure they maintain proper drainage runoff protocol and inform the public through events and initiatives of how they can respect and take care of their water sources.
Sanitary v.
Stormwater
At the Opelika level, Harris noted that there is often general confusion about the differences between sanitary and stormwater sewers.
According to Harris, sanitary sewers are underground pipes that carry sewage from bathrooms, sinks and toilets to wastewater treatment plants where it is filtered, treated and later discharged.
Storm sewers are designed to transport rainfall and other runoff into streams, creeks, rivers or other bodies of surface water.
Keeping a vigilant eye
According to topographical maps, Opelika serves as a geographical divide between the Tallapoosa and Chattahoochee River watersheds.
Harris and his crew frequently take and analyze water samples from various Opelika creeks and streams that stem from these river systems to gage purity and test for dangerous germs like E. coli.
ADEM lists sediment as the state’s number-one pollutant, but Harris stressed that improper disposal of trash, chemicals or other hazardous substances can jeopardize the integrity and quality of the water.
“As City Administrator (Joey) Motley likes to put it, ‘would you like your kids or dogs to be in the water with that fill-in-the-blank substance in there?’ Hopefully that statement might make people think twice before acting irresponsibly,” Harris said.
Harris added that members of Opelika’s engineering, environmental services, police and fire departments are all trained to observe and report anything they see while performing their job that might pose a risk to the city and its water supply.
Long-term goals
In his two years with Opelika, Harris said he believes that Opelika has seen vast improvements in the implementation of its SWMP.
Harris said he believes more education about the subject will not only benefit the city environmentally, but economically in the years ahead.
“I’m trying to get the program whipped into shape and build a framework out where we can have a conscience here. Because if we did, we wouldn’t have the trash problem that we do right now,” Harris said. “There’s also an economic side to it – if you have unsightly streams or bodies of water, industries will not come to your town. People are not going to sell in your town, so you cap your ability to market yourself as a great and pretty place to live and if you don’t have tax base in your community, you can’t service your needs.”
For more information, visit www.adem.state.al.us or call (334) 705-5450.