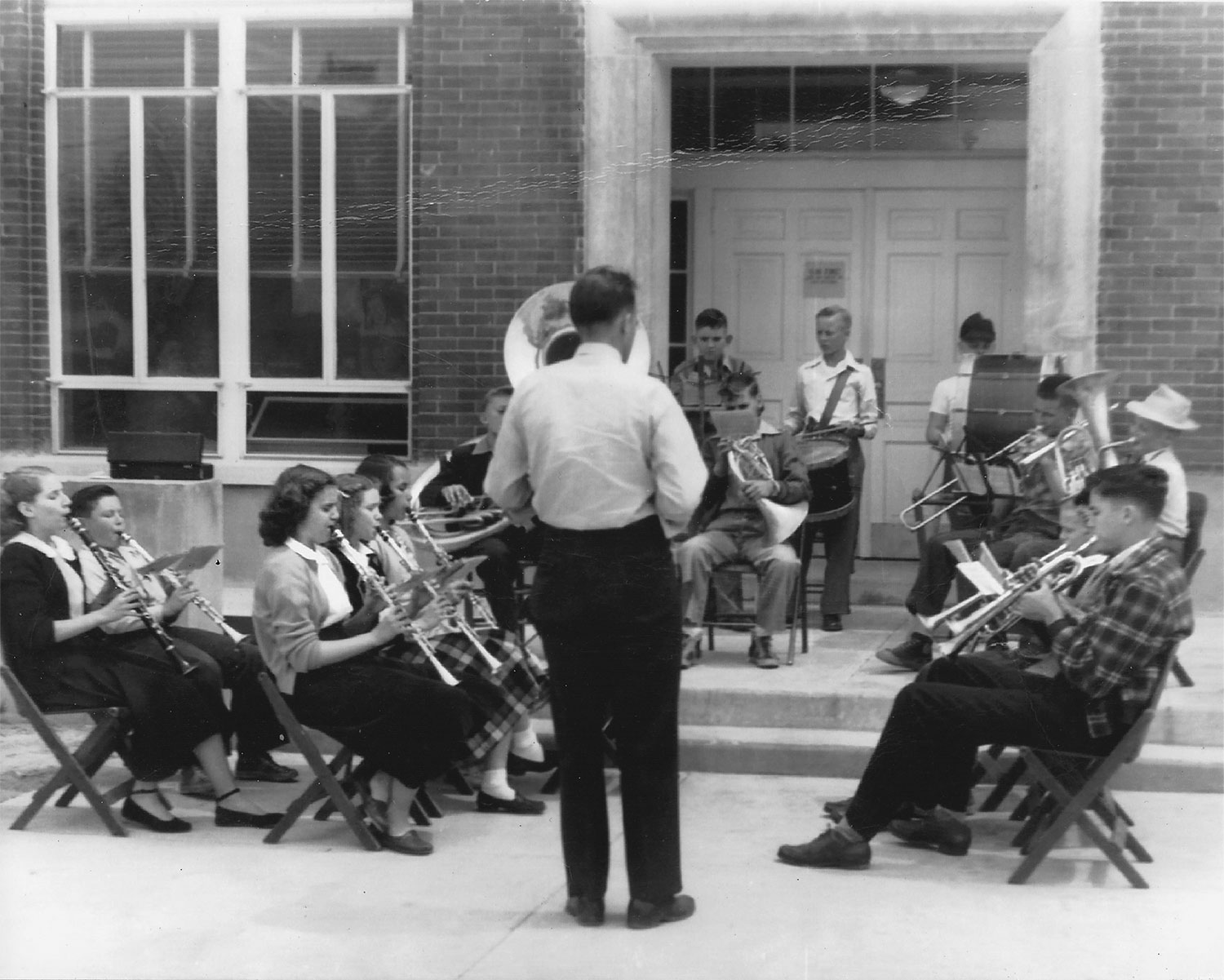 Ah, here it is, in all its rich, musical beauty: The Lamar County High School Band.

You know some of us. The handsome guy at the forefront of the trumpet section is your faithful correspondent. That’s right. Me. First trumpet, sitting there wondering if I’ll be able to hit the high note of “The Star Spangled Banner.”

The guy with the sun hat on is brother Jack, playing the baritone. He’s wearing the hat because it was a very hot, sunny Memorial Day, and he is of the red-haired type. A few minutes in the pure sun and he’d look like the weenie at the campfire.

Cousin Tom is on the mellophone. Charlotte Bragg is in the first clarinet chair, along with Ann Mills and Danny Reedus and Jane Mulls and others. Charlotte also played the piano for some of our concert pieces.

I think the occasion was the unveiling of some plaques and statues that honored our service people.

The fact that we were able to play a recognizable tune is a credit to the man whose back you see, Mr. Goodwin. He had come to my home town, fresh out of World War II, a retired major, to start an eating place, a nice restaurant. Called it  Guy’s Steak House. Hmmm. That was much too high class for most of us.

He backed up and started over again with the G & H Cafe. Breakfast. Blue plate specials … and the best beef stew known to mankind.

But he still needed some extra money, so he volunteered to start a band program at LCHS. He was starting from, I mean, scratch. Most of us had never seen a real live clarinet or trumpet in person. There were a few instruments – sousaphone, mellophone, baritone – left over from a long-ago attempt to start a band.

We practiced and practiced by section. Then one bright day, we were able to play “Abide With Me” all together. Wonderful.

There were setbacks, like the time I just kept on playing the popular version of “I’m Always Chasing Rainbows” instead of the way its classical source went. Mr. Goodman advised Harry James, being sarcastic (at which he could be very good), to just play what the little book said.

Then there was the famous time at the teachers’ picnic. They would have one near the end of every school year. We were the entertainment.

Mr. Goodwin wanted to show how far we had come in only two years. We played a couple of simplified Sousa pieces. Sounded pretty good, out there in the woods. Then Mr. Goodwin said, “All right. Now let’s play No. 16.

That’s when Dupree Pennington, with his sousaphone all wrapped around him like a Burmese python, squeaked, “But, Mr. Goodwin, I just played that one.”

Mr. Goodwin, banging his head against  a tree, quietly said, through gritted teeth, “Play it again, Dupree, play it again.”

I think he was relieved when they called him back to the army.

Bob Sanders is a veteran local radio personality, columnist, author and raconteur of note. He can be reached at bobbypsanders@netscape.com This e-mail address is being protected from spambots. You need JavaScript enabled to view it .