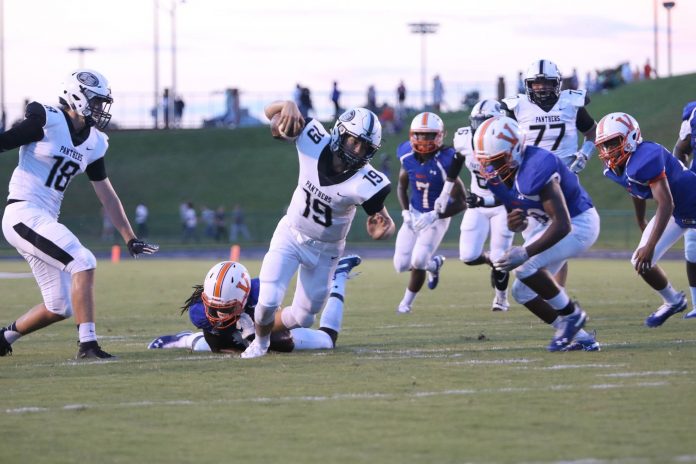 On their first possession of the second half, Smiths Station (2-0) orchestrated another impressive touchdown drive covering 43 yards in under four minutes, adding to their lead over a battling Rams team. Then the lightning and torrential rain came.
After a suspension of play, the game was called at the 5:35 mark of the third quarter. Final score – Smiths Station 27 Valley 0. Just like that, Smiths Station football is 2-0 for the first time since 2015.
Well before the literal thunder and lightning lit up the Valley sky however, a figurative duo of “Thunder – RB LC Harris, 14 carries for 72 yards/2 TD’s, and “Lightning” RB Kyran Hall, 9 carries for 51 yards/TD was lighting up the field.
Sprinkle in 6 carries for 25 yards from RB DJ Moffett, a passing touchdown from QB Corey Minton to WR Dre Cooper, a stifling defensive effort which created 2 turnovers and surrendered (by my count) a lone first down, and you have the makings of a great Panther win.
Although the game was well in hand, it wasn’t without mistakes. The Panther’s fumble deep inside the red zone and a kicking team breakdown resulting in a blocked PAT provides room for improvement.
Having said that, Head Coach Mike Glisson has to be pleased with the effort on both sides of the ball. He should be pleased to know that this win will serve as another confidence booster and momentum for his team going forward. Most importantly, he has to be very pleased to know that their 2-0 start provides his team with the valuable lessons of how to win – again.
Smiths Station plays Central at home on Friday, September 7, at 7 p.m. CST.