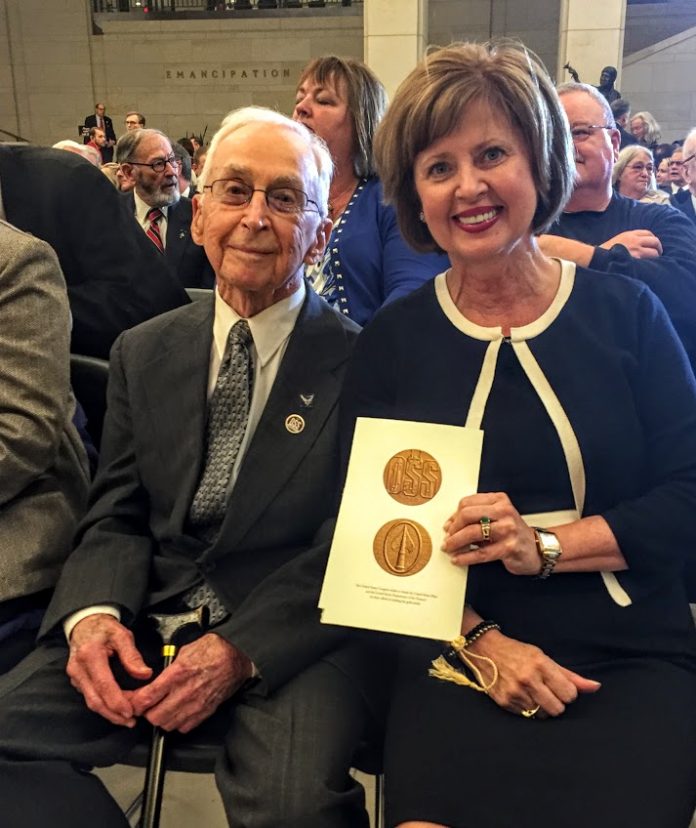 Opelika native and World War II veteran Orrin “Boody” Brown IV was honored at a gold medal ceremony for members of the Office of Strategic Services March 21 in Washington, D.C.
Formed June 13, 1942 by then-U.S. President Franklin D. Roosevelt and William J. Donovan, the agency’s primary purpose was to serve all members of the United States Armed Forces through acts of espionage behind enemy lines.
Brown, along with other living OSS members, were recognized for their displays of courage and sacrifice by dignitaries including House Speaker Paul Ryan (R-WI), Senate Majority Leader Mitch McConnell (R-KY) and House Democratic Leader Nancy Pelosi (D-CA). Brown said the experience was one he will never forget.
“It was a little bit overwhelming,” Brown said.
Brown’s path to the military
Born and raised in Opelika, Brown attended the Alabama Polytechnic Institute (now referred to as Auburn University), where he pursued a degree in aeronautical administration.
Following his graduation in summer 1941, Brown applied and was accepted into the U.S. Army’s Aviation Cadet Program.
“I went into the military almost immediately after graduating college. I was as green as grass,” Brown recalled.
After finishing the courses, Brown was later commissioned as an officer and tasked with bombardier duty, responsible for dropping bombs and other shipments from bombers.
The “Carpetbaggers”
Brown was first headquartered at the Cherry Point Marine Corps Air Station in North Carolina, patrolling the coasts for enemy submarines and escorting allied ships safely to port.
He also served briefly in France, dropping not bombs but leaflets advocating French citizens to join the resistance movement against German Nazi forces.
In 1943, Brown and other members of the 801st/492nd Bombardment Group (where they received their nickname as “The Carpetbaggers”), were assigned to England.
Training with members of the Royal Air Force, Brown’s group provided support for the defense of England while the Allied Forces plotted a counter-attack against the Germans.
One of Brown’s most distinguished missions came on the eve of D-Day, June 5, 1944, an Allies push into Nazi-occupied France. Following a briefing to discuss D-Day plans, Brown’s group embarked on their mission.
“I made a drop in the south of France, and we came back out hitting the French coast just as day was breaking on D-Day. I saw a fleet in the channel, and I was glad to be in the air instead of down there with them,” Brown said. “It’s something I’ll never forget, awesome in a sense.”
The award
On Dec. 14, 2016, Congress passed the Office of Strategic Services Congressional Gold Medal Act to recognize OSS members for their service.
Historians recognize the OSS as a precursor to modern intelligence agencies like the CIA and Special Operations Forces.
Looking back
Brown, who turns 98 today, reflected on his military experience and shared his thoughts on how it helped him not only become a better soldier, but a better person.
“I think I matured considerably and learned so many necessary lessons about life in general, things that would help me down the road,” Brown said. “I also think my squadron played a role in that. I was with them from day one, the day I got my commission, and they were just a great group of guys.”