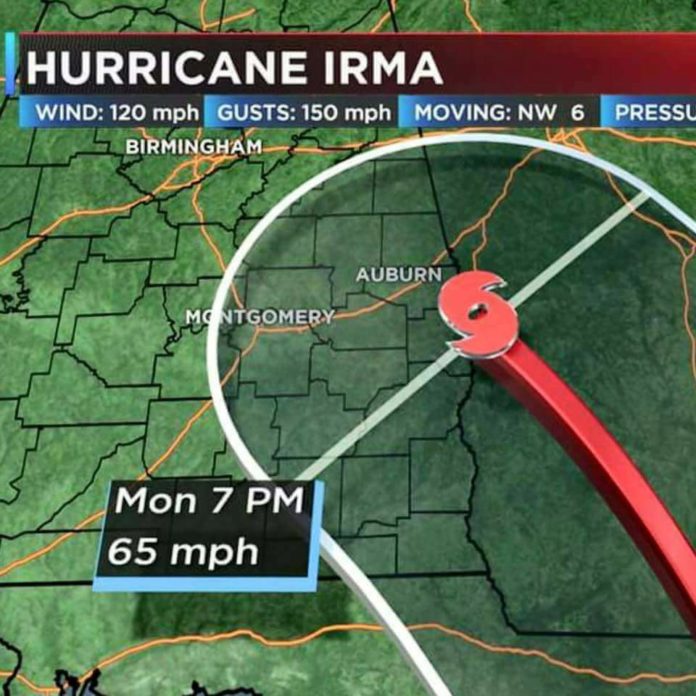 While the southeast braces for Hurricane Irma and the tornadoes that may accompany it, Opelika has opened its homes and businesses to neighbors from Florida and Georgia who have had to flee ahead of Irma’s path. Thousands of evacuees have driven north. While it is not clear at this time how many of those evacuees will ride out the storm in Opelika, local Emergency Management Association spokesperson Rita Smith says there are hundreds, possibly thousands, who have filled the hotels in Opelika and Auburn. According to their reports, this is the largest influx of displaced people the area has ever seen. At the time of this printing, the EMA is working closely with the governor of Alabama to open “as many shelters as possible across our state.”
As of Saturday, all hotels in the Opelika/Auburn area were at full capacity and are expected to remain so until Wednesday or Thursday. Joe and Faye Evans from Naples, Fla. spent 32 hours in a car packed with their two children, dog, and valuables on their ride up to Opelika. “If I never ride in my car again, I’d be okay with that,” said Joe. “I love my family and all, but… sheesh… that’s a lot of togetherness.” Their son, Jameson, said he is just happy they could bring their Russell Terrier with them. “We’re all just so grateful to be here together,” Faye said.
Many area churches, including First United Methodist and First Baptist of Opelika, have been instrumental in placing those who need shelter with local families who are willing to share their homes. Facebook has been filled with posts from locals who are offering rooms and meals to strangers in need. Jeff K. from Apalachicola was close to tears as he shared the story of an elderly woman who had bought him a meal Friday night in Tiger Town. “Someone who doesn’t know me at all, opened her wallet, bought my supper, and sat down to eat with me. Then she said I could stay in her guest room. The kindness of strangers, man….really touched me.”
Business owners across the city have run specials all weekend, discounting meals and essential items to further aid out-of-towners. Angela and Chris George, owners of O Town Ice Cream, were quick to respond to the news that Opelika would be hosting so many travelers in need of aid. They have offered free ice cream to evacuee children, as well as pup cups for their canine family members. As of Saturday, O Town Ice Cream had served at least 25 families who have traveled here. “We were just so heartbroken for how many people were here and knowing that all of our hotels were full,” Angela said. “We wanted to do something to help ease the stress on these families who had been in traffic. Ice cream won’t fix anything that they’re going through, but we hoped it would bring them some comfort.”
Smith said Opelika’s support of evacuees has exceeded her expectations. “I’ve never seen anything like it. The citizens of Opelika have gone above and beyond. The people I’ve met who have evacuated here are just so grateful and overwhelmed by our kindness. It makes me so proud of our area.”