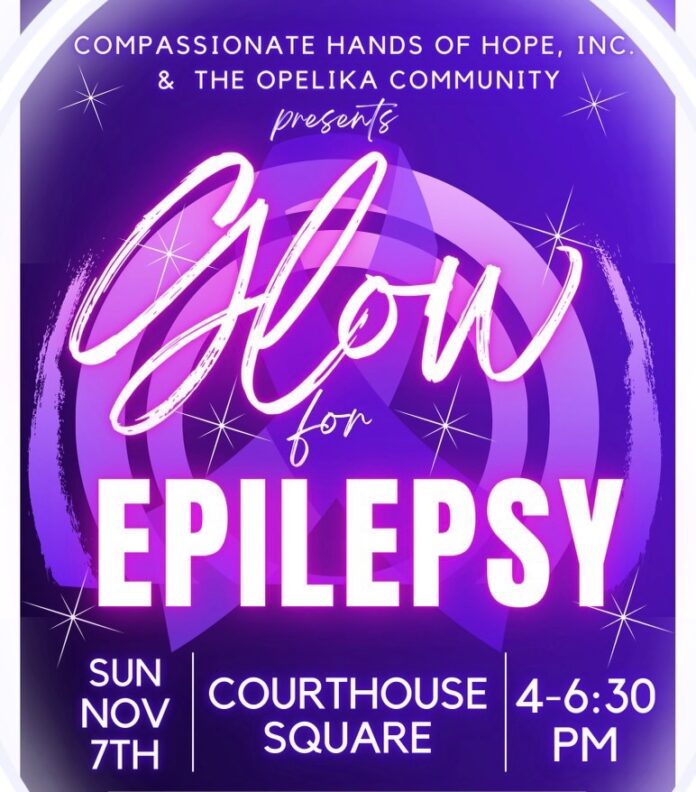 The local non-profit Compassionate Hands of Hope Inc. is hosting a Glow for Epilepsy event at Courthouse Square in Opelika this Sunday, Nov. 7 from 4 to 6:30 p.m.

Epilepsy is a neurological disorder in which an individual experiences seizures, which are caused by abnormal electrical activity in the brain. These seizures can cause involuntary changes in body movement, function, sensation awareness and behavior. One in 26 people will be diagnosed with epilepsy in their lifetime and an estimated 3.4 million people in the U.S. are living with epilepsy.

Janataka Holmes, founder and CEO of Compassionate Hands of Hope Inc., has a son with epilepsy and said she wanted to host this event to raise awareness about the disability.

“[Epilepsy] has been very prevalent in our lives,” Holmes said. “So, I have wanted to bring light to the neurological disorder for our community to observe it and to understand epilepsy is not a disease, it’s a disorder.”

The “glow” in the Glow for Epilepsy event — which is actually more of a festival featuring carnival games and competitions for youth — comes from the “tons” of purple glow sticks that will light up Courthouse Square once the sun sets.

In addition, the Opelika Fire & Rescue Department will be attending the event to give a demonstration on what to do in the event someone around you has a seizure, and the Opelika Police Department will also be in attendance to announce the launch of its new “S.A.F.E.R” (Special Assistance For Emergency Response) Registry — a voluntary program created to help first responders assist individuals with cognitive, developmental or mental health disabilities in the event of an emergency.

Vendors will also be taking part in the festivities, providing tasty food options for all of those who attend. Because the color purple is associated with epilepsy, vendors will be serving up purple-themed treats.

Furthermore, in the weeks following the event, citizens will be able to participate in a purple pumpkin scavenger hunt around town.

“We will have purple pumpkins that will be displayed throughout the city at different businesses that supported the Glow for Epilepsy Event,” Holmes said.

Lastly, Holmes wanted to thank the numerous businesses sponsoring the event and give a special thank you to Opelika Mayor Gary Fuller, Councilmember George Allen and Rep. Jeremy Gray for their support.