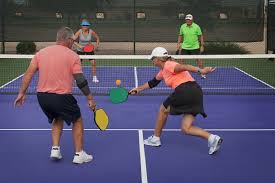 The Opelika Sportsplex has plans for the construction of 12 pickleball courts, which, if funding is approved, are slated to be finished later this year or in early 2018.

Recognized by NBC as the fastest-growing sport in America, pickleball is a racket game that blends elements of ping pong, tennis and badminton.

Opelika Parks and Rec Director Sam Bailey said the development would not only be a good addition for the Sportsplex, but an economic booster for the city.

“Pickleball is booming, and we’re trying to get out on the front edge of it. Based on what I see around at other (pickleball) tournaments, I don’t think it’s out of the question that we’ll have 200-plus people come from out of town and show up at the tournaments that we plan to host here,” Bailey said. “They’re certainly going to eat at our restaurants, shop here, play golf here, buy gas here … we just think it’s going to be a real good thing.”

Opelika resident Dr. Robert Huskey said he and fellow pickleball enthusiasts are excited about the future and impact of the sport both in Opelika and Lee County.

“Pickleball is a real fun game, a good social game. I think a lot of people will really have a lot of fun with it,” Huskey said. “You don’t even have to have a racket-sport background to play it, and I think it’s going to be a big draw both here in Opelika and other places.”

Bailey said the first planned tournament for the new facility will be in May, as a part of the 2018 Alabama Senior Olympics.

For more information about the pickleball courts, call the Sportsplex at (334) 705-5560. For pickleball rules and details, visit www.usapa.org.

Editor’s note: The previously published article was misleading. While plans are still in the works, the Sportsplex has yet to secure funding for the construction of the pickleball courts.