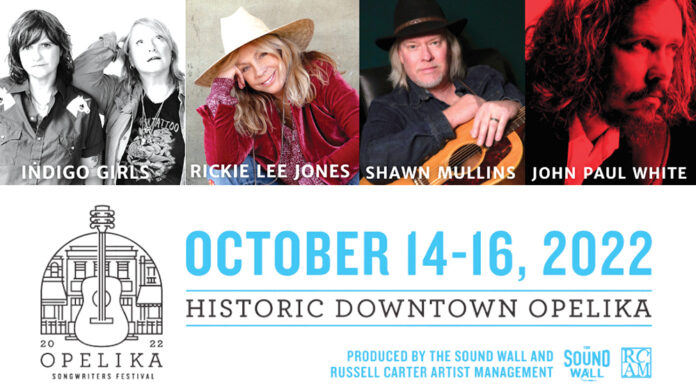 CONTRIBUTED BY THE SOUND WALL

Over the past four years, the Opelika Songwriters Festival has attracted die-hard live music fans from around the Southeast to hear original songwriters spanning many genres of music perform their songs. Restaurants, bars, a distillery and an Inn in historic downtown Opelika become music listening rooms for two nights and a third day for dozens of solo, band and in-the-round performances throughout the weekend of Oct. 14 through 16, 2022. Tickets are on sale now at www.freshtix.com/events/opelika-songwriters-festival-2022.

Along with the music, Opelika Songwriters Festival is the perfect event for people who like to combine music, sports and relaxation at a world-class spa. The official Festival hotel is the Opelika Auburn Marriott Resort and Spa at Grand National featuring three 18-hole Robert Trent Jones Golf golf courses, with scenic views, driving ranges, putting greens and golf lessons. Additionally, there are elaborate resort-style pools with bar service, as well as eight tennis courts and an award-winning spa.

“Amy and I look forward to getting back to the Opelika/Auburn area where we have played many fun shows through the years,” said Emily Saliers of Indigo Girls. “We are especially excited to share the stage with Rickie Lee Jones whom we admire so much as a singer and songwriter.”

“Downtown Opelika stands out for its authenticity,” he said. “There are brewpubs, a distillery, boutiques and a pinball emporium inhabiting these beautifully restored, original cotton warehouses and retail buildings from the early 1920s Pepperill Mill era that drove the economy many years ago. Having these locations — all within walking distance — utilized as listening rooms for the Festival make this a fun, intimate gathering.”

Indigo Girls’ debut album sold over two million units under the power of singles “Closer to Fine” and “Kid Fears” in 1989 and turned Indigo Girls into one of the most successful folk duos in history. Over a 35-year career that began in clubs around their native Atlanta, Georgia, the Grammy-winning duo has recorded 16 studio albums (seven gold, four platinum, one double platinum), sold over 15 million records and built a dedicated, enduring following. Their latest critically acclaimed record, Look Long is a stirring and eclectic collection of songs that finds the duo of Amy Ray and Emily Saliers reunited in the studio with their strongest backing band to date as they chronicle their personal upbringings with more specificity and focus than they have on any previous song-cycle.

Rickie Lee Jones will make her Opelika Songwriters festival debut fresh off the release of her memoir, Last Chance Texaco, released in the spring of 2021. Her chronicles are “as rich and colorful as Jones’s best lyrics,” writes The New York Times. The two-time Grammy winner, known for her haunting voice that ranges from deep yearning to late-night sultry, first appeared on the Los Angeles scene in the mid-1970s penning instant classics like “Chuck E.’s In Love,” “Danny’s All-Star Joint,” and the pivotal breakup album “Pirates.”