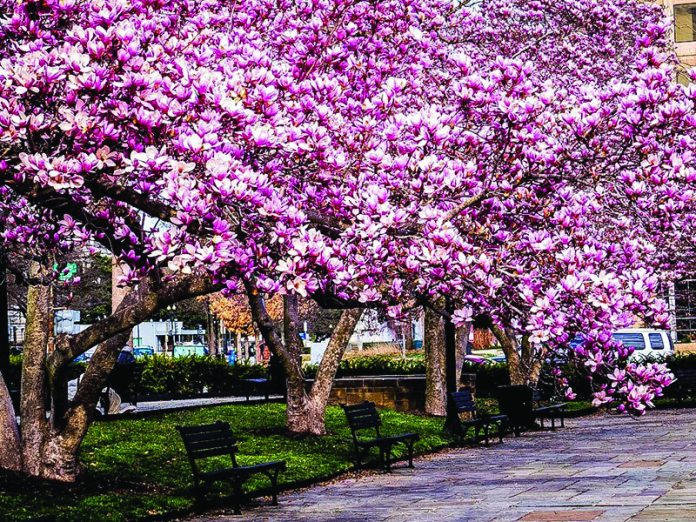 “Service above Self” – that’s the motto of the Opelika Rotary Club (ORC). To serve and beautify the city, they are donating 100 trees to commemorate the group’s 100th anniversary.
“It turned out that this year one of our Rotary International president’s projects, for Rotary as a whole, is for each club to plant one tree for each member,” said Dr. Harry Cullinan, Opelika Rotary Club president.
“I thought, well we have almost 100 members, and we could plant 100 trees, and our 100th anniversary is coming up next year.”
That’s when Cullinan turned over the major project to Rotary Member Shey Knight. Then, the search was on to find a place that could handle 100 trees. “Once we decided, I called Tipi Miller with Keep Opelika Beautiful, who is also a Rotarian. We more or less started this together,” Knight explained. “We went on a mission to identify where we could put trees. We really scoured Opelika. We came across Evergreen Cemetery, and it was calling for trees.”
Evergreen is an older cemetery that was rediscovered by the city and given a facelift a couple of years ago. “The city said, ‘let’s put some money into it and make it nice.’ So the city invested in a fence around it and also some new stonework,” Knight said. “If you go to this cemetery, it is a beautiful place, but no trees. So it hit us, this is the place where the 100 trees can go.”
Knight said they started looking for a smaller or medium tree so roots wouldn’t grow into future gravesites. “(We wanted) something planted in full sun, and we wanted flowering. If there’s 100 beautiful flowering trees, you might go there as a destination, so we wanted to draw people there.”
During the search, Knight, along with the club, decided on planting Cleveland Select Pear Trees, but a local master gardener wasn’t thrilled with the choice. “He said the tree was worse than kudzu, and an invasive species, so we were asked to rethink that. We’re trying to be Rotarians and do the right thing. If there was a problem, then we will choose something else,” Knight said. Instead, they selected the Saucer Magnolia Tree. “It has a beautiful pinkish flower and a very nice form to it – a nice trunk, and the branches don’t spread too much,” Cullinan explained.
Evergreen Cemetery is on Frederick Road in Ward 1.
“I am very excited about it. To have this partnership with the Rotary Club is a great partnership,” said Opelika City Council Member Ward 1 Patricia “Patsy” Jones. “The area where they are putting the trees will give a better aesthetic to the look out there. For years, we’ve been trying to find ways to improve our cemeteries. ”
The plan is to plant 60 to 75 trees along the 1,600-foot fence line around the cemetery. The extra trees will be planted at the adjacent Rosemere Cemetery and along the new roundabout on Frederick Road.
“We reached out to Mike Hilyer at ESG, also a Rotary member, to dig the holes for the trees, and we reached out to Patsy (Jones), and she graciously gave us $2,000 toward the project,” Knight said. “Everyone has an interest in this cemetery because it is beautifully redone. Three, four, five years down the road, the trees are going to be beautiful. In 10 years, they’ll be gorgeous.”
“It puts an exclamation point on our 100 years. It gives us a platform but also a way to renew our club – a symbolic thing that is lasting,” Cullinan added. “This will be a must-see in Opelika.”
The trees are set to be planted at the cemetery by April 7.