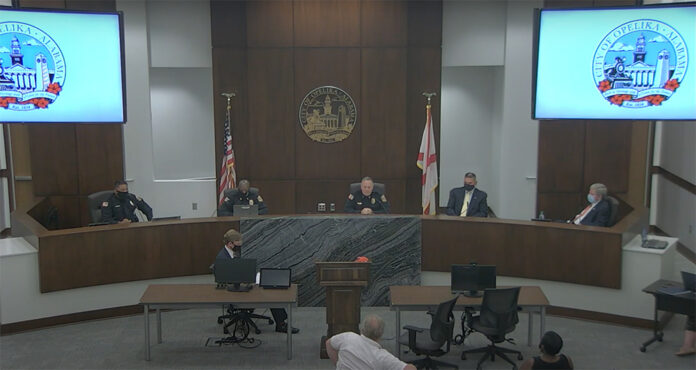 The city of Opelika held the first of three town-hall question and answer series Thursday evening and invited members of the Opelika Police Department to answer questions about reform, racism and goals for the future.

“While we’re doing good things, we know that there’s always work to be done to improve,” he said.

One of the recent efforts of the police department was to create the Community Relations/Special Services Division, which will be led by Healy.

“This new division is going to focus on our community outreach efforts,” Healy said. “We’re also going to be working to overhaul some of the internal processes that we have here at the police department, that way we can serve the citizens of Opelika better.”

Matt Ulmer, state specialist with the Alabama Extension System, moderated the event and explained he has no ties to the Opelika Police Department.

How to stop a culture of racism:

Ulmer asked the first question of the department: how does the Opelika Police Department make sure that there is not a culture of racism in the department?

“Here at the police department, we basically have a zero tolerance rule,” Healy said. “We don’t take, and we don’t want any of our employees to feel discriminated against. We like to be culturally diverse.”

Amerson said that as a captain, he makes sure that his lieutenants know there is a standard to be upheld.

“That standard is no tolerance,” he said. “No tolerance and we make sure that they grasp that and they also pass it down to their officers.”

Brown said that the standard is also upheld in the recruiting process. The department looks into the social media accounts and backgrounds of all applicants to make sure there is no racial discrimination in applicants.

Excessive force in the OPD:

“One of the cruxes of the conversation related to police reform, in light of more recent events, is excessive force and what’s perceived as excessive force from an officer to a citizen,” Ulmer said. “Under what circumstances does the police department perceive using excessive force to be appropriate?”

Healy said that there is extensive policy related to the topic and officers are trained under that policy from their first day.

“In general, the law states that we are allowed to use one level above what’s being used against us,” he said. “That’s kind of a lot to say in a short sentence without getting into specific situations.”

Overall, however, Healy said that officers look at each individual situation with ‘reasonableness.’

“Would a reasonable police officer with the same set of facts and circumstances in that same situation have ­done the same thing and that’s kind of how it’s measured,” he said.

Healy stressed that the situation is taken seriously, however.

When force is used and could be deemed excessive, Brown said that it is investigated by the department.

Amerson also said that officers are taught that if they see another officer using excessive force or acting inappropriately, they not only can, but should, stop that officer.

“It doesn’t matter who you are,” he said. “Me, as a captain, if I’m out there doing something that’s inappropriate, then that officer, I don’t care if he’s a brand new officer, he should have the ability to tell me to stop.”

Reyna said that he supports the use of body cameras, because they show exactly what happen, whether the officer is in line or not.

An audience member asked the panelists how he can share the information with his neighbors, perhaps those who don’t care or are afraid of officers.

Healy said that one of the best ways that officers can connect with those people is to be invited into the neighborhoods.

“Let us talk, let us have a conversation with the neighbors,” he said. “Let the neighbors ask the questions to us that they want to ask. It’s one thing for somebody to pass along information that they’ve heard, but to actually have that conversation face to face is something, I think, that we need to do.”

Many of the questions that the audience asked related to citizen involvement. How often should citizens get involved, call the police or step in?

“What we need from the citizens is participation,” Reyna said. “That is what we’re looking for. There’s no way that we can police the city of Opelika by ourselves. We need ya’ll to be engaged.”

If a citizen hears a car alarm or a domestic dispute, they should call the police. Healy said that citizens know their neighborhood and streets better than he could. If something is out of place, call the police.

“We would much rather come and it be nothing for us to do than not come and we’ve been needed,” Brown said. “So that’s why we encourage everybody to call. There is no such thing as a small thing, so call us.”

“What does it mean for an officer to develop probable cause for a traffic stop as was described in a city of Opelika facebook post yesterday regarding the apprehension of a robbery suspect,” an online viewer asked. “And how many “innocent” people were ultimately pulled over, searching for the suspect, after probable cause was developed?”

Healy said that probable cause is developed when someone breaks the law in front of an officer.

“The person that we’re about to pull over has committed a traffic violation,” he said. “… Turning without a turn signal, speeding, running a red light, the list goes on and on. So that is developing probable cause to make a traffic stop.”

There were several more questions asked, ranging from how investigations are conducted, whether mental health professionals would be better equipped to deal with some problems, communication with officers and more.

The full video can be viewed on the city of Opelika’s Youtube page (www.youtube.com/channel/­UCbC211oOlu­LdYAAAoC8P9YQ).

The next town hall meeting will be held on Sept. 3 at the Municipal Court at 6 p.m. and will deal with how the city can build relationships with youth in the community.

“Our goal in having these is to answer your questions, gather your thoughts and garner ideas that can help us better serve you,” Fuller said.