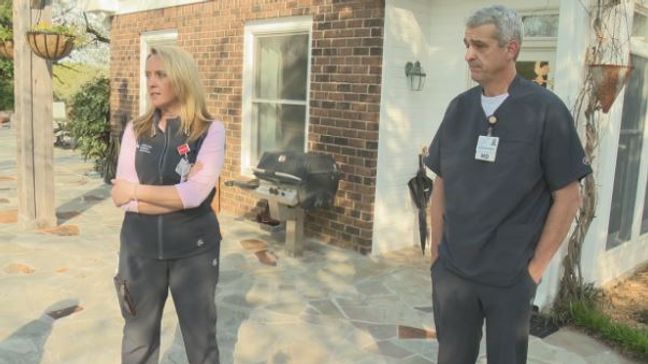 David Bruce M.D., an Opelika native who graduated from Lee-Scott Academy and Auburn University and now lives in Chattanooga, has teamed up with his wife Lisa Ann Smith M.D. and manufacturers in that area to produce locally sourced medical gowns for hospital workers amongst shortages because of COVID-19.
“The biggest impact was just gearing up for it (COVID-19) and with the shortage of supplies (it was) almost a perfect storm,” Bruce said. “Cardinal Health has a supply area in Nashville and we got a double whammy … they had a recall on a lot of gowns in the late fall which had to be replenished… and subsequently a tornado hit the Nashville area destroying another medical supply warehouse that supplied gowns to our region…we went down to a low level of gowns and face masks.”
Wade Verbal of Wise Manufacturing in Hermitage, Tennessee contacted a mutual friend and offered his assistance in creating and donating supplies such as booties and masks, however, the idea of creating medical gowns came to life from this offer because of the evident shortage in the hospitals. Bruce and Smith quickly put their plan into action by creating a sketch and designing a pattern for the gowns, even placing a small prototype on a “Hannah Montana” doll within 24 hours. The next day, the couple met with Verbal along with the prototype and two days later, 50 life-sized gowns were made and ready to be delivered. Three weeks into the manufacturing and more than 8,000 gowns a day are being made with orders from all over the country.
“The gown is unique… it’s made with the same material used in the operating room and (provides) that level of protection, the gown pops right on by putting it over your head and extending your arms while tying the side for full front and wrap around protection,” Bruce said.
An orthopedic surgeon, Bruce noted that the two local hospitals he works for, Erlanger and Parkridge Medical Center, were running through 300 to 500 extra gowns per day before production of the medical gowns. He credits social media for providing such a positive impact not only in the local community but around the country as hospitals continue to place orders.
Through social media, other manufacturers such as Angiosystems and Southern Champion Tray reached out to the Bruces. Southern Champion Tray has started creating packages of their newly-made face shields and more than 200,000 of the shields have already been delivered to hospitals near the Bruces and in New England.
“All of this has been made in America, it’s been incredible to see. A lot of people out there want to help, they want to stay in business and help those people who are helping the community,” Bruce said.
“The thing that Lisa and I offered is that we knew what the needs were … if local people such as nurses, physicians, etc. can think outside of the box, and say ‘Hey I know they don’t make these, but I bet that’s possible..,’ (you never know how far that idea may go).”
“I still love the people of Opelika and it’s still my hometown,” Bruce added.