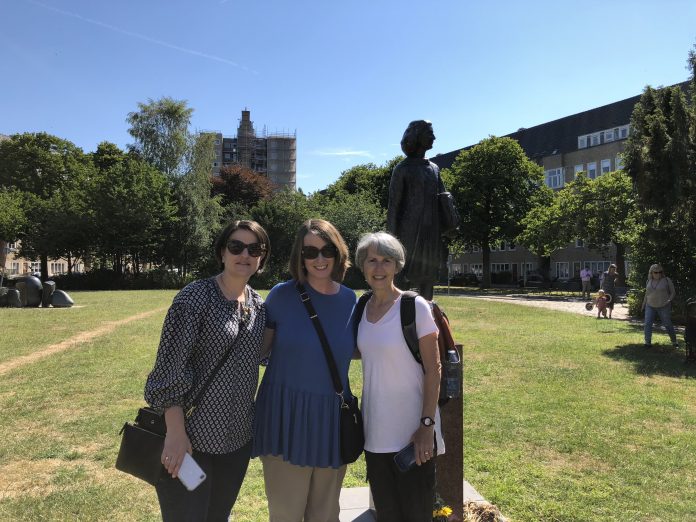 Two Opelika Middle School teachers recently traveled overseas for the Jewish Foundation for the Righteous’ “2018 European Study Program” to learn more about the history and atrocities of the Holocaust.
Following their involvement in the JFR’s “Advanced Seminar” in Newark, New Jersey, in February, Kate Gholston and Tricia Skelton both said they saw the summer program as a chance to physically view the sights and places where the genocide occurred.
From July 8-16, Gholston, Skelton and 10 other educators traveled through the Nethlands and Germany, where they met with Holocaust experts and discussed the methods of teaching the Holocaust to students in both countries.
Trip highlights included a visit to a Holocaust memorial in the town of Frankfurt, Germany; discovering the difference among concentration, slave labor and transit camps in the towns of Weimar, Buchenwald, Dora-Mittelbau, Westerbork and Amsterdam, as well as a study of Anne Frank’s journey through the event.
Both teachers shared their memories and thoughts from the trip, one that served as a sobering and eye-opening experience.
“Being there) weighs on you emotionally. What was so eye-opening is that these camps and ghettos and places of internment were in the heart of, or very close to, the centers of villages and cities … sometimes even just yards away from ‘normal’ daily life,” Gholston said. “It just hit home that it was very obvious that people saw what was happening, knew what was happening, and often just carried on with their daily routines as if that was just the way things were.”
Skelton said she was fascinated to learn of the difference among the various types of camps that existed in Nazi Germany.
“I really only knew about the work and death camps. I was unfamiliar with how the transit camps worked,” Skelton said. “I didn’t know that the people there were actually treated well. They were able to work, make money, get treatment for illnesses, and could come and go as they pleased. This was a way to make it seem like the camps weren’t that bad at all. Little did the people know how much their lives would change when they were sent to another type of camp.”
Gholston said she and Skelton plan to incorporate the knowledge they acquired from the trip into future lessons they teach their students to prevent another event like the Holocaust.
“As human beings, we are capable of so much good and so much evil. It is frightening to see how a civilized, educated, cultural, and advanced society fell to the grips of prejudice and hatred to the point that an entire population of people was almost wiped out,” Gholston said. “Sadly, you can look at many situations around the world and see hatred causing similar horrific outcomes. It is so important to know the past to try to make the future a better place.”
For more information about the JFR and its mission, visit www.jfr.org.