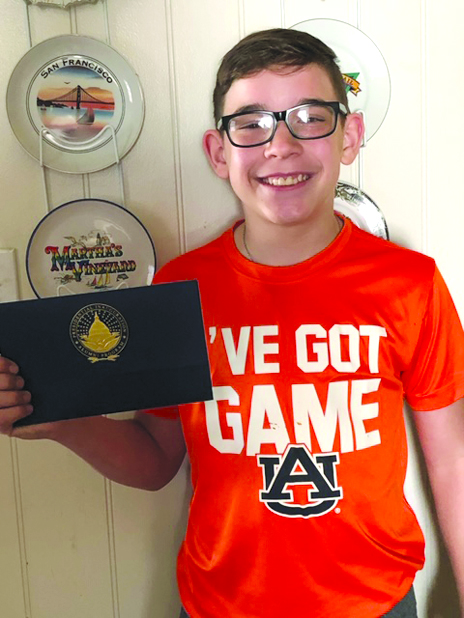 Earlier this month, 13-year-old Opelika Middle School student Harrison Renfroe received a letter offering him the chance to travel to Washington D.C. and attend next year’s Presidential Inauguration ceremonies.
Because of a nomination from a teacher at his previous school in Motgomery and his “A honor roll” status at OMS, Harrison was inducted into the National Youth Leadership Forum’s Pathways to STEM program three years ago, which connected him with this opportunity.
“(Receiving this letter) meant a lot because it showed me that my hard work was being recognized at a high level,” Harrison said.
A.J., Harrison’s father, lives on a single-household income and is needing to raise between $3,200 and $3,400 to help cover his son’s costs and travel expenses. Those who wish to assist can donate through the Facebook fundraiser “Harrison’s Invitation to the 59th Presidential Inauguration” or by calling A.J. at 334-235-5311. As of Feb. 25, more than $700 has been donated through the Facebook fundraiser.
According to the letter Harrison received, the trip would consist of five days spent touring and sightseeing in the nation’s capitol, including a visit to the Smithsonian. He would also have the chance to go to the National Mall to attend the inaugural ceremonies.
In addition to his success in the classroom, Harrison excels in baseball and football, is involved with the local Fellowship of Christian Athletes chapter and is a volunteer with the Miracle League of East Alabama.
“(I would like to attend because) my goal is to serve on a national level. I want to see the event because of its importance to our country,” Harrison said. “I ultimately hope to serve as President of the United States (someday).”