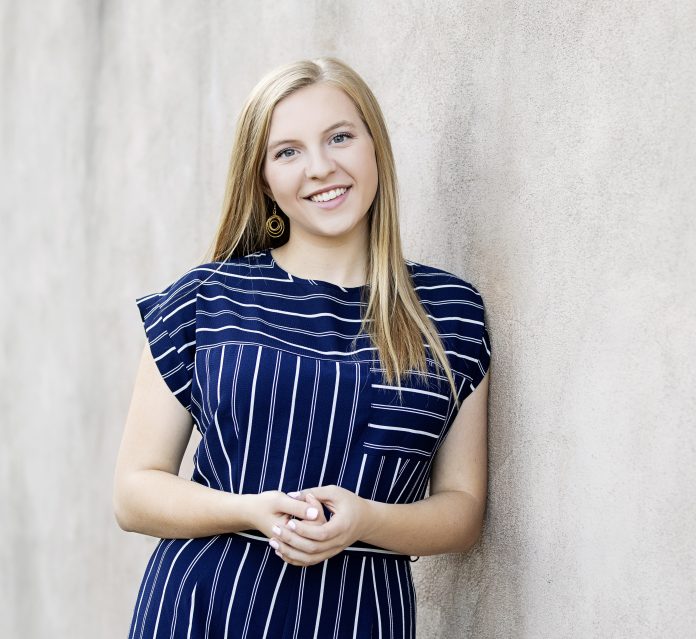 Rebecca Wilson, daughter of the Revs. Jeff and Robin Wilson, has been selected as the winner of the Colonial Dames XVIIC Scholarship for the State of Alabama.  Rebecca is first in her class at Opelika High School with a GPA of 4.306 and a member of the National Honor Society.  In addition to her academic achievements, she was a major contributor on the varsity soccer team. She has played soccer for 15 years and was selected as team captain for the 2020 season. She is known for her well-orchestrated defensive plays.

Wilson has proven her leadership abilities in several theatre productions with her singing and her dramatic renditions. She achieved acclaim in her rendition of Kate in “Kiss Me, Kate” and Miss Hannigan in “Annie.”  She was outstanding in the lyrical, as well as the spoken role of Eve in “The Apple Tree: The Diary of Adam and Eve,” based on one of Mark Twain’s works. She was also cast as Audrey in the production of “Little Shop of Horrors”.

Wilson has proven herself a very talented musician also – singing in the Soundtrax A Capella Choir, playing violin for the Auburn University Youth Orchestra and named Outstanding Piano Accompanist for a state competition.  She began playing the piano as a first grader and has lived through years of performances for the public. She took up the violin in the fifth grade and has performed with the Auburn University Youth Orchestra since tenth grade.  She participated in the Alabama All State Orchestra in both the sinfonia and consort orchestras. Through the Alabama All State choral program, she was selected as the Outstanding Accompanist. From 2016 to 2019, she was named the district winner, and she was honored as the Outstanding Piano Accompanist for the state of Alabama during the state competition her junior year. She has performed many school concerts with the Soundtrax A Capella Choir, and was able to serenade the Opelika City Chamber of Commerce and the Alabama Transition Conference.

Wilson has not yet decided on a major for her college studies but is keeping her options open as she applies to several well-known state and regional universities.  She is one of two CDXVIIC scholarship winners in Alabama. The other winner is Bailey Griffin of Anniston.

“We are overjoyed to have such wonderfully energetic and talented winners for these scholarships,” said Judith Kennedy Arthur, president of Alabama Society of CDXVIIC.

The National Society Colonial Dames XVII Century is an organization of women 18 years of age or over, who are lineal descendants of an ancestor who lived and served prior to 1701 in one of the Original Colonies in the geographical area of the present United State of America. Their members are devoted to preserving the memory of those that settled in the United States of America prior to 1701.

Established on July 15, 1915, the National Society Colonial Dames XVII Century is a nonprofit organization with its headquarters located in Washington D.C. Constructed in 1884, the headquarters building holds historical significance and is listed on the National Register of Historic Places.

The goal of Colonial Dames XVIIC is to uphold and continue the values and ideals of our ancestors. Their work is dedicated to the preservation of historic sites and records, promotion of heraldry and coats of arms and support of charitable projects and education. Through these and many other activities, we acknowledge and honor those individuals who paved the way for present generations.  There are 11 chapters of CDXVIIC in Alabama. The Captain Thomas Yale Chapter is in Opelika. For more information, visit www.colonialdames17c.org.