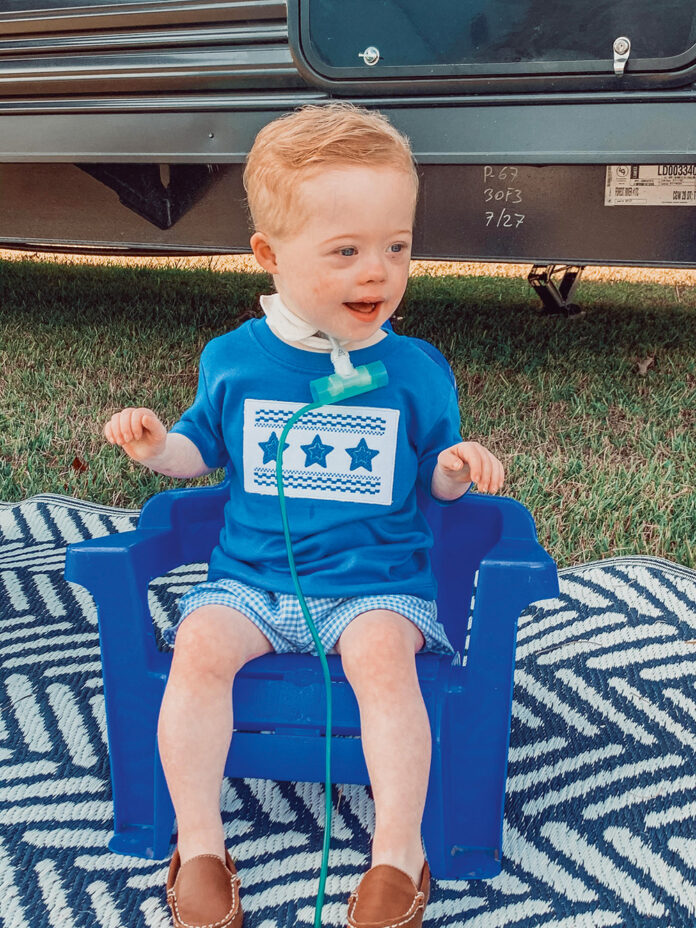 Exton Black is an Opelika child whose life recently had some of its constraints lifted. “Exton has all the extra: extra machines, extra chromosomes, extra attitude,” his mother, Savannah, said.

Exton has Down Syndrome and a respiratory condition that requires his being on a ventilator and oxygen 24/7. The machinery his unique group of diagnoses requires limits how far the Blacks can go on trips. “[The machines] are huge, and they are loud, and they are not travel-friendly,” Savannah said. “

The Make-A-Wish Foundation had to do some extra work to grant a wish of Exton’s. Because he is nonverbal, his case presented the added preliminary challenge of discovering what his wish was. “Make-A-Wish is very prepared for stuff like that. They’re really helpful for people who have a nonverbal child,” Savannah said.

Based on all of the signs from Exton and testimony from other families who had made the same wish, the Blacks asked for and received a camper that could accommodate more medical supplies for Exton. This extra storage makes trips much safer and extends the Black family’s traveling range.

“It’s a game changer. This is the gift that never ends,” Savannah said. “In the camper, we can take three times as much.”

Before the camper, Savannah would have to get prescriptions for all of the machines Exton needs, call ahead to pharmacies in the destination area to make sure they could fill those atypical prescriptions, familiarize herself with the route to the nearest hospital, make sure there was a hospital that could accommodate Exton, and the list goes on.

“We’re so excited to say, ‘We’re just gonna pack up and go,’ just like a regular family. We’re really tickled about it; we’re just shocked. We’re overwhelmed with the love everyone has shown us,” Savannah said.

Savannah has worked with Down Syndrome Alabama on a project that aims to increase awareness of the disorder and the people who live with it. She applied for a proclamation day, got in touch with the Opelika mayor’s office and attended a city council meeting. Opelika recognized Oct. 1 as Down Syndrome Day.

So far, official proclamations have been made in Alabaster, Auburn, Hoover, Mountain Brook, Opelika, Pelham, Trussville, Valley and Vestavia Hills.

To learn more about Down Syndrome Alabama, visit the organization’s website (www.downsyndromealabama.org).