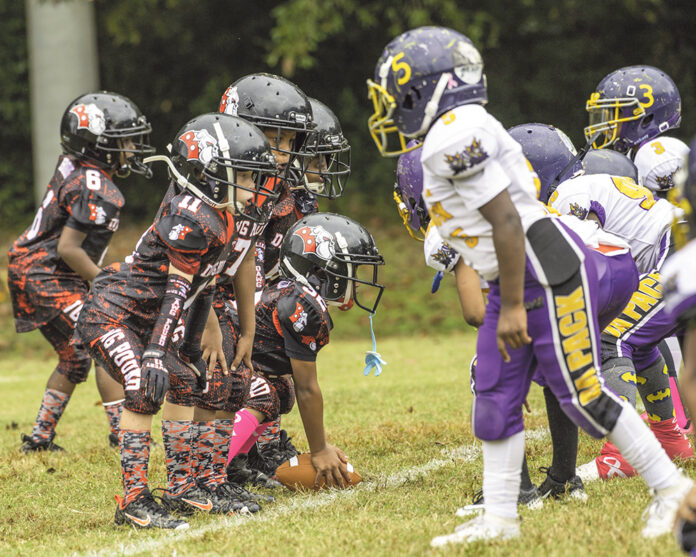 If you’ve watched any football in 2020, you’ve become accustomed to players missing games due to COVID-19. Well, Anthony Bryant, the founder of the youth football group, the Opelika Dawg Pound, says that COVID-19 “affected the whole season,” for his youth football teams too.

An Opelika native, Bryant started the Opelika Dawg Pound in 2017 through the work of his non-profit, the Knee High Foundation.

Bryant uses The Dawg Pound to foster the Knee High Foundation’s mission to mentor, serve and uplift youth with structure and guidance in a nurturing environment. Specifically relating to football, the Dawg Pound hopes to drastically reduce violence and let youth use sports as a vehicle to bolster their academics and give back to their respective communities.

Of course, they still want to win football games. But the coronavirus has made that a greater challenge than ever.

When shutdowns hit Alabama in March, Bryant and his teams shut down too. “We weren’t allowed to do anything,” Bryant said. At the start of the season, the Dawg Pound missed out on their conditioning sessions, couldn’t travel and were forced to miss their first tournament.

“It really hurt us in our prep time, our practice time and our bonding and chemistry,” Bryant said.

While the pandemic has been hard for everyone, Bryant went on to say it has been particularly hard on his 5 to 6-year-old program. “You know, my babies, they’ve never played contact sports in their life,” Bryant said. “They are still learning the game of football. COVID kind of shut us down from being able to really teach them the game of football.”

Additionally, the 12U team – filled with many players who were on the original Dawg Pound team in 2017 – have been no exception to the struggle. “[They] were some of the ones who caught it the worst,” Bryant said. “This was a very promising year for us due to the talent we had.” Some kids were pulled from the team due to coronavirus concerns – something Bryant said he completely understands – and the squad was left admittedly depleted.

As much as the coronavirus affected the Dawg Pound, many of the Knee High Foundation’s regular community service projects were put on hold too. The coronavirus prevented them from visiting veterans and nursing homes and from delivering Christmas presents to St. Jude.

In spite of the pandemic, they still managed to find a way to serve. Bryant said the foundation donated 1,000 book bags for back-to-school and $1500 in scholarships for local seniors. They also participated in some socially-distanced volunteer work like trash pickup. Additionally, the Knee High Foundation typically gives local youth a number of activities to do outside of football. Some of them were cancelled due to concerns over the virus, but Bryant said they still managed a camping trip and even a day at the bowling alley.

The twilight of the 2020 Dawg Pound is now upon Bryant and his teams. The Dawg Pound still has three more tournaments coming up: one over Thanksgiving, the next one in Pensacola and one just before Christmas. For the children, the football is only part of it; the good habits they learn and the community service that they do through the Knee High Foundation provide an innumerable amount of other benefits. Bryant said that’s what make his teams unique.

“I would like to thank the community and my sponsors for their support and their donations,” Bryant said. “My children are grateful; it allowed them to get different things like uniforms and just being able to travel. We are in our third year, so we are still in the beginner phase. Whether it’s word of mouth or monetary, whatever ways, just continue to support us because we are the only team in the area that’s doing the things that we do… And it’s not just football.”

PLAYERS OF THE WEEK