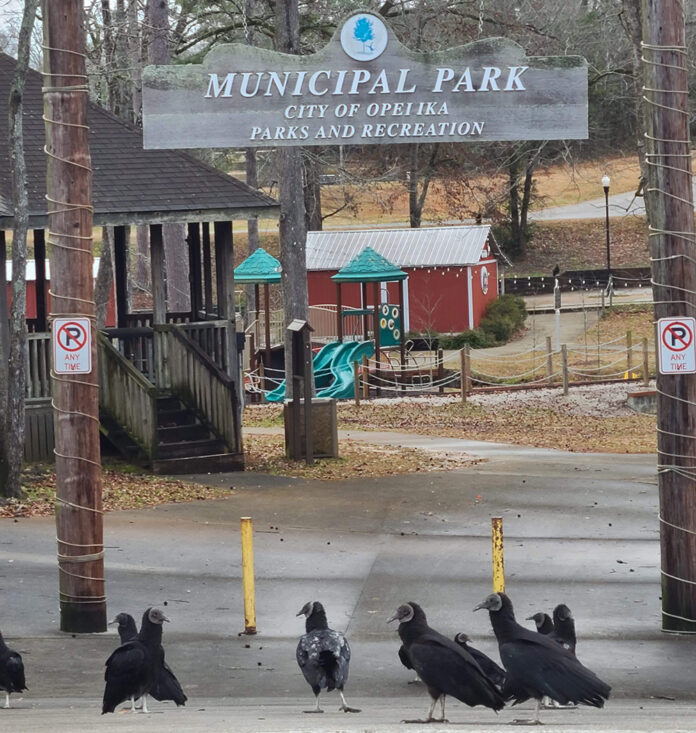 The Opelika City Council voted unanimously to table the proposed changes to the city’s animal ordinance during last week’s council meeting. The proposed ordinance would have potentially allowed the shooting of animals and birds that were determined to be a nuisance under strict guidelines.

Mayor Gary Fuller made the request to table the proposed changes and stated, “We are working with the USDA Wildlife Services to relocate the vultures near Opelika Middle School and the Calhoun Tennis Center.” Fuller went on to add that the USDA Wildlife Services have both a method and a plan to humanely encourage the birds to relocate somewhere else.

Former Fire Chief Byron Prather was honored during the meeting. Prather, a lifelong resident of Lee County, retired on Jan. 31 after more than 35 years of service to the city. The council recognized him with an official proclamation. “We’re going to miss him,” said City Administrator Joey Motley. “He’s done a great job for us. He is a great leader and great gentleman and is a pleasure to work with.”

“It has been a pleasure and honor to serve the citizens of Opelika,” Prather said. He spoke of the great people with whom he has worked and how he has been blessed. “You gave the opportunity to be the fire chief, and if you hadn’t, I would have missed out on meeting even more fantastic people in the city. It has been very humbling, and [I’ve] been very blessed. Thank you, sir.”

– authorized the approval of a document for the consent to release the restrictions and the reversion in a deed for property owned by Southside church of Christ.

– approved Tim Aja to the Indian Pines Recreation Authority for a term ending on June 7, 2021.

The Opelika City Council meets on the first and third Tuesday nights of every month. Meetings are open to the public and are held in the Municipal Courtroom located at 300 Martin Luther King Blvd.