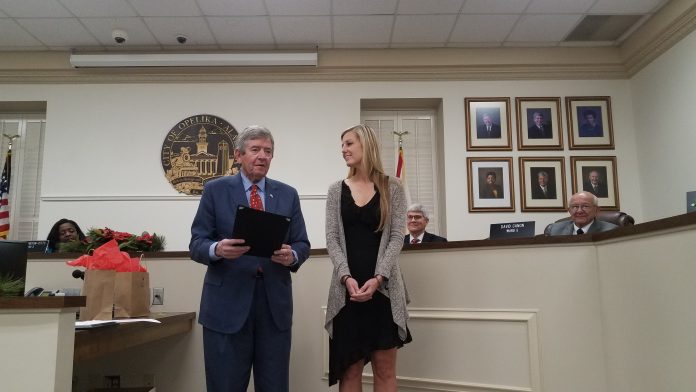 Mayor Gary Fuller recognized Jessica Mills last night for her accomplishments in completing the “Triple Crown of Hiking” earlier this year. The three trails that make up the informal triple crown are the Appalachian Trail, the Continental Divide Trail and the Pacific Crest Trail which have a combined total of nearly 7,900 miles.
Mills will be recognized and awarded a plaque next year from The American Long Distance Hiking Association – West (ALDHA–West) for this achievement. The (ALDHA–West) is the only organization in the United States that recognizes this hiking feat and as of the end of November 2018, only 396 hikers since 1994 have received this honor. Mills did not complete her final trail in time to submit it prior to the deadline for this year’s award cycle.
Mills began her hike of the Appalachian Trial in March 2015, then the Pacific Crest Trail and she completed the Continental Divide Trail in October.
“I know you can drive it (Continental Divide Trail) but walking it at 2 miles per hour is a lot more scenic way of seeing it,” Mills said.
Fuller went on to describe the many accomplishments of Mills and her family and siblings.
“What an outstanding family. They are all high achievers. Jessica you have led the charge,” Fuller said. “On behalf on the city council, I am happy to recognize and honor you and your entire family for many achievements.”
Patricia Skelton was recognized by Mayor Fuller as the 2018 Sanford Teacher Award recipient. Only one teacher from each state receives this honor. “We are certainly thrilled and ecstatic that she is part of our staff and one of our teachers at the middle school,” said Keith York, principal of Opelika Middle School.
Opelika Municipal Court Judge H. Kenneth Wilkes was recognized on the occasion of his retirement after having served the city of Opelika for more than 30 years.
In other business, City Administrator Joey Motley delivered the building permit report for the month of November. The total revenue from building permits for the month was $8,261,161.60 and there were 33 permits issued for new single family homes issued.
The city council also:
• approved Chickchickporkpork Grill’s request for a Restaurant Retail Liquor and Beer On-Premise License
• approved a resolution to purchase police equipment for police package automobiles for the OPD utilizing the State of Alabama contract – the equipment will be purchased from Emergency Lighting by Haynes totaling $57,690
• voted to removed the resolution for demolition for 513 Ermine St. from the agenda. A permit for demolition has been issued to the Auburn-Opelika Habitat for Humanity
• approved a resolution for a special use permit request from Verizion to modify their equipment located at 1015 West Point Parkway.
• approved a resolution to accept infrastructure, Northbrook Subdivision phase V.
• approved a resolution to accept a contract with Jocelyn Zanzot and Daniel Neil, d/b/a Mobile Studio, to serve as the Casey Foundation Community of Hope Project Manager for the Carver-Jeter Neighborhood Project
• approved a resolution to accept an appropriation contract with the Boys & Girls Clubs for $40,000
• approved a resolution to accept for a special appropriation to the Opelika City Schools for the Opelika High School’s “Spirit of the South” marching band’s trip to perform at the “Taxslayer Gator Bowl” on Dec. 31 – the appropriation is $20,000
• approved a resolution to accept a Final Change Order for the 5th Avenue/ North 4th Street Drainage Project – this change order adds an additional amount of $9.700 to the contract, resulting in a new contract amount of $259,312
• approved to reappoint Joanne Camp as a Municipal Court Public Defender. Her new term will end 1-02-21.
• approved to reappoint Todd Rauch and Ken Ridley to the Lee-Russell Council on Government – MPO Citizen Advisory Committee.
The Opelika City Council meets on the 1st and third Tuesday night of every month at City Hall. Meeting agendas can be accessed online at www.opelika-al.gov/129/Agendas-Minutes. The next meeting will be Jan. 2 with a work session beginning at 6:30 p.m. and the regular session starting at 7 p.m.