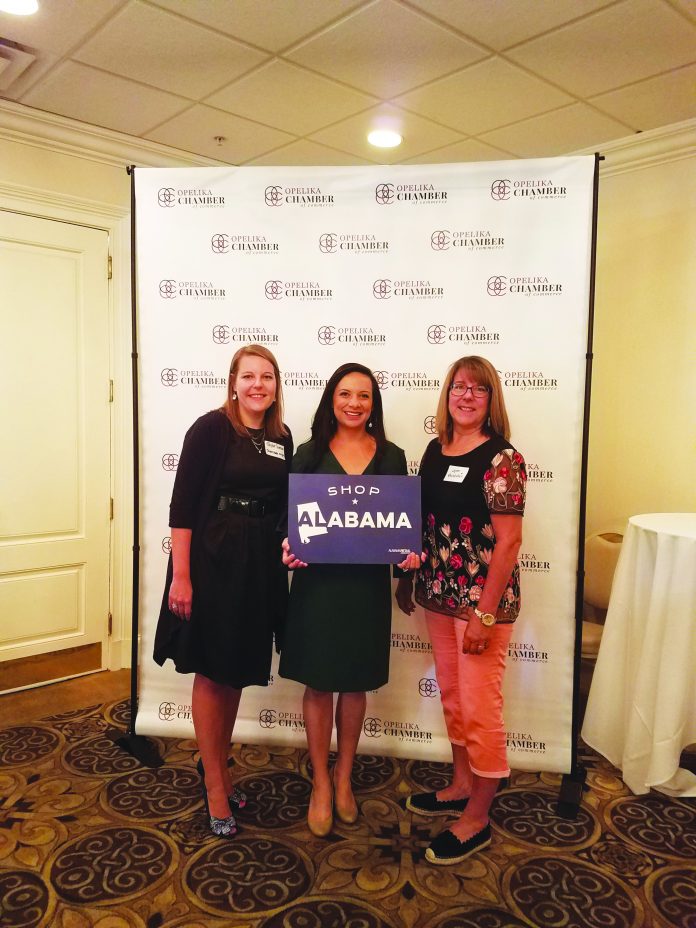 Last Thursday, the Opelika Chamber of Commerce held their quarterly “Business over Breakfast” meeting at the Saugahatchee Country Club.
The guest speaker for the event was Melissa Warnke, Manager of Communication and Engagement of Alabama Retail Association. Her focus for the event was “Shop Alabama” and the power of shopping local.
The “Shop Alabama” campaign started with a goal of being a “cheerleader” for Alabama-based retailers. It began as a one-time press conference when Warnke got a little league team together whose shirts listed their sponsor’s name, the “Shop Alabama” logo and also the phrase “have you ever seen .com on a little league jersey.” It has grown from there and has become a year-round campaign.
Warnke described the campaign as a call to action and a point of pride. “Shop Alabama” calls people to get out and find their local retailers and shop with them. But the program also is designed to promote pride in small businesses and they encourage people to tell others why they shop locally within their community and Alabama. “It has been a really fun campaign to take around. Our mission is to uplift our business community and to make sure that people understand their value in supporting their local businesses, Warnke said. “It is so much more than spending a dollar. It is how your dollars are then used in your own community.”
Taylor Sumrall from Taylor Made Design had this to say about the information given today.
“The retail association has some fantastic ideas and they’re very similar to what we’ve thought of while running our business for years now,” Sumrall said. “There is power in shopping local, and we are excited to hopefully make their (“Shop Alabama”) presence in Opelika more wide spread so that more people can know about this campaign and we can really build the (idea) of shop local in Opelika.
This focus on shopping local comes right as the “Downtown Loves You Back” campaign in downtown Opelika kicked off on Monday. The participating downtown merchants will be offering specials throughout the week as a way to say thank you to their customers.
Director of Opelika Chamber of Commerce, Pam Powers-Smith stated that (the chamber) is excited that the Alabama Retail Association visited with the businesses here in Opelika. “It was encouraging to hear that retail business is alive and well. Her statistics and insight about small and independent businesses were interesting to everyone in attendance. I look forward to working with them so that we can help our members in the future,” Powers-Smith said.
Also during the event Southern Crossing, a downtown specialty retail shop, was named as the Small Business of the Quarter. Southern Crossing is locally owned and operated by Valerie and Mike Smith. The shop is located at 231 S. 8th St.