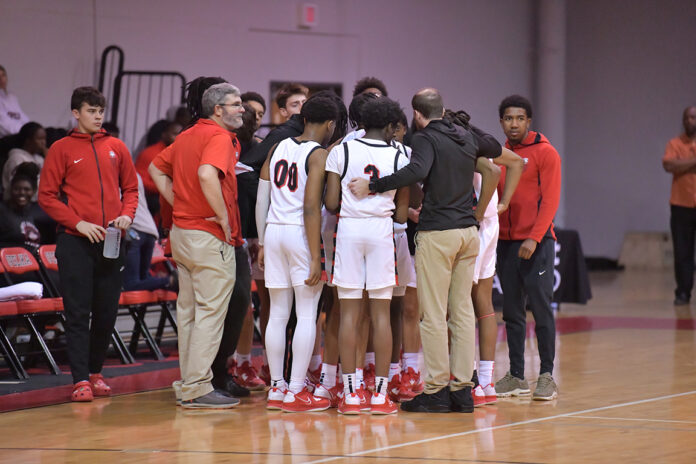 Opelika hung in there against Central — for all but two and a half minutes in the third quarter.

Instead of getting a big win over the Red Devils to stay unbeaten in area play, Central went on a 13-1 scoring run in the third quarter, and Opelika fell to 1-1 in area play heading into a rivalry matchup with Auburn, looking to taste .500 again.

The Bulldogs lost some momentum against Auburn, losing 76-59 despite 24 points from senior transfer from Florida Mekhiron Brock, leading all scorers in the game in front of a packed-out Main Street Gym. Sitting at 7-9, that’s the story of the season, according to Opelika head coach Wesley Button.

“We’ve been very competitive this year,” Button said. “I think a lot of our early losses were us learning how to finish a game. Now, I think we’re learning how to sustain intensity for four quarters.”

The Bulldogs have certainly shown sparks of playing like a winning team. Behind leading scorer Isaiah Knight (17 ppg) and Brock, who has three games of 30 or more points and 20 or more rebounds this season, they notched key wins over Benjamin Russell, Russell County and stole an area win from Smiths Station.

Close losses, however, have plagued Opelika in the first part of the season. Six of Opelika’s nine losses have come by 10 or fewer points, including a 57-55 loss to Pike Road in December. On the other hand, it has only won one game decided by single digits this season.

“I need to do a better job as a coach getting some of my guys who play heavy minutes — to maybe give them more breaks earlier. That way, they’re not as tired down the stretch,” Button said. “As a team, we’ve got to learn to trust each other more, not just on the defensive end. The guys are starting to see, when we make more than two passes on a possession, we usually end up with a bucket.”

With three main guys who are experienced in Opelika’s varsity squad — Knight, Brock and D.J. Harris — Opelika’s main points of focus are “talking and flying around” on defense. The team has had its best outcomes when contribution is more evenly dispersed throughout the team.

Button explained that when he has three guys score double-digit points, it gives the team a good chance at winning, but whenever four guys score in double figures, they have won every time.

Along with the team playing together and sustaining intensity, Opelika is figuring out how to avoid that one period in each game that puts it in a position where it has to play with a deficit at the end of games like the third quarter against Central.

“I told them [after the loss to Central], ‘We lost focus for just two and a half minutes. That can lose you a ballgame,’” Button emphasized. “It can’t be three and a half quarters, it’s got to be all four quarters. We’ve got to keep our focus throughout the game. That’s a big thing I’ve learned.”

Opelika has five more chances to improve its cohesiveness throughout the entirety of a game. It plays Lafayette next on Monday before rematches with Smiths Station and Auburn, a home matchup with Dadeville and a rematch at Russell County to end the season.

As it vies to rebound from three consecutive double-digit losses, Button also hopes to change the trajectory of Bulldog basketball to close out the 2022-23 campaign.

“Now, we’re at that point of changing the culture and getingt this program headed in the right direction,” Button said.