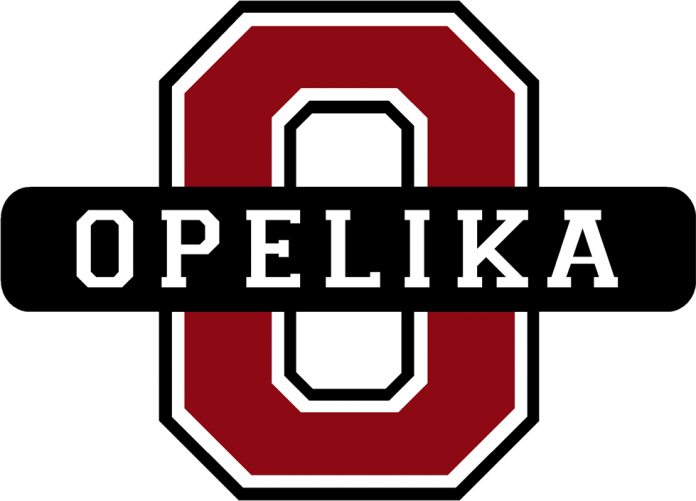 The Opelika High School baseball team split a pair of games with Prattville last Saturday at Bulldog Park to improve to 20-13 overall.
Prior to the doubleheader, Coach Nick Richardson honored his seniors in their last regular season game.
The Bulldogs lost the first game 8-0, after Prattville scored four runs in the 6th inning and three runs in the 7th. Senior Jackson Reynolds held the Lions scoreless through five innings, but yielded four runs in the 6th prior to being relieved by Hoony Oh. The Bulldogs scattered four hits, one each by T.J. Jones, Jared Bartlett, Jackson Craft and Micah Christian.
Opelika won the second game 12-3 behind 11 hits. Bartlett led at the plate with three hits, three RBIs and scored three runs. Jones and Christian added two hits apiece and two RBIs. TeKeil DeMunn, Cory McCoy, Craft and Brooks Bryan each added singles. Andrew Parr earned the win on the mound, pitching four innings and allowing two earned runs. Christian pitched three scoreless innings to finish the game.
STATE PLAYOFFS
The Opelika baseball team won the area championship and will host Northridge this Friday in the first round of the 6A AHSAA playoffs. The two teams will play a best-of-three series, with a doubleheader Friday night and a third game if necessary Saturday at 1 p.m.
The Jaguars finished with a 21-11 regular season record, finishing second in the area behind Hillcrest. They are coached by Hunter Gregory and former University of Alabama Coach Jim Wells. Richardson once played for Wells at Alabama.
Game one will start at 5 p.m. at Bulldog Park. Game two will start 30 minutes after the first game is completed. Fans are asked to park in the front parking lot, and handicapped parking is available inside the blocked off area.
LISTEN TO OHS
BASEBALL ON
RADIO
Fans can listen to the Opelika/Hillcrest series on WZMG 910 AM, online at hallelujah910am.com or the WZMG station on the iHeartRadio app. Jeff Sasser will provide commentary, and I will handle the play-by-play. All games will air on the iHeartRadio app.
GIRLS SOCCER
The Opelika girls soccer team won two matches last week, 4-1 over Stanhope and 3-0 over Sylacauga.
Amiya Brown and Kayla Phatsadavong scored two goals each against the Mustangs. Breonna Bartlett scored one goal, and Estafany Alba added two goals against Sylacauga. Eleanor Wilson and Abby Noon each provided assists.
The Lady Bulldogs improved to 9-5-2 overall and 3-0 in the area.
BOYS SOCCER
The Opelika boys soccer team lost 4-1 to Stanhope Elmore and tied with Sylacauga 1-1. Anthony Alba scored the lone goal against the Mustangs, and Mario Martinez scored the lone goal against Sylacauga.
Both the boys and girls teams played area foe Benjamin Russell last night, but the results were not available at press time.
TENNIS
The Opelika girls and boys tennis teams participated in sectional matches Tuesday, but results were not available at press time.
TRACK
Opelika track and field Coach Jimmy Johnson and his team will host their first track meet in several years next Saturday. The meet will keep the name, “Mike Spain Invitational,” but no other details are currently available.
Opelika City Schools spent $1 million to renovate the high school track two years ago.
The Mike Spain Invitational is the first of many meets that Johnson expects to host. Opelika Middle School and Opelika Recreational Department Track programs also use the track.
AHSAA NEWS
The AHSAA officially approved instant replay for the 2018 season at the central board meeting last week in Montgomery. Instant replay will be used in all Super 7 Championship games but is optional for the regular season. The schools must purchase the equipment from DVSports. The NFHS granted Alabama permission to use replay in the coming season and future. Coaches will have two challenges per game to use for non-judgement calls.
The AHSAA will provide each set of officials with an iPad to review challenges. AHSAA Director of Officials Mark Jones will also be able to look at the replay, no matter if he is at the game or not.  For more details, go to AHSAA.com.
D. Mark Mitchell is sports director for iHeart Media, Alabama Dixie Boys state director and vice-president of the A-O Sports Council. He can be followed on Twitter at VOICEOFTHEDAWGS.