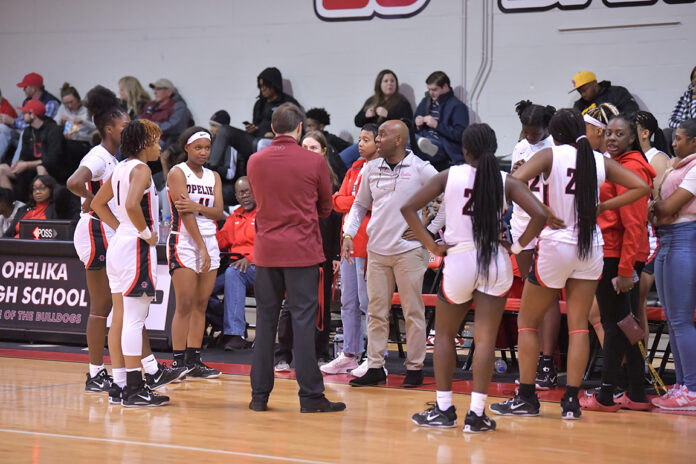 Sitting at 7-11 after an excruciating 69-26 loss to Auburn, Opelika girls basketball is searching for consistency in what head coach Blake Smalley described as an “up and down” season.

The Bulldogs know the joys of a big win, as the 51-29 triumph over area rival Smiths Station was, but they have also felt six beatdown losses of over 30 points this season.

“We’ve kind of been up and down a little bit,” Smalley said. “We’ve actually played a much tougher schedule this year than we did last year. But I also feel like that’s kind of led us to where we are now. We lost a lot of production last year, probably our top five contributors.”

The team has had to find cohesiveness all over again, as they lost five seniors, three of them starters, as well as a sophomore who was one of the team’s top statistical producers from last season.

While Opelika has returning contributors from last season, like senior guard Z Fanning who now leads the squad in scoring, it is “learning how to win again” as a unit. While the team has certainly participated in its fair share of blowouts, they have also lost four games by five points or less, and three of them were by a single score.

While Smalley sees glimpses of a complete team, he knows they still have a way to go after losing two straight region matches, to Central and Auburn, by more than 30 points each.

Some areas in which Smalley pointed out improvements are rebounding and ball handling. With several girls up near 6 feet tall and one that surpasses that mark, rebounding is an area where the team has a high ceiling, but with two of its best ball-handlers gone from last season, turnovers have been an area of concern for Smalley.

While offensive possessions haven’t yielded the kind of success the team needs to beat stiff competition, the coach has recognized some breakthrough moments on that side of the floor as of late.

While a 1-2 start to region play is not what Opelika hoped for, Smalley said he knows he’s working with a young team with a lot of room to grow. The squad consists of five sophomores, two juniors and three seniors, one of which transferred to Opelika in August and is relatively new to the system. With senior veterans Fanning and Cherdi Daniels paving the way, one thing the team wants to work on is focusing on the play at hand and not dwelling on mistakes. This will be key for the Bulldogs in rebounding from disappointing losses to area neighbors when it travels to face Lafayette on Monday before  finishing out the season with rematches against Smiths Station, Central and Auburn, then hosting Dadeville before going to Russell County to end its season.

“I feel like we’ve gotten better as the year’s gone on,” Smalley said. “But I think we’re still improving. I don’t think we’ve peaked yet.”