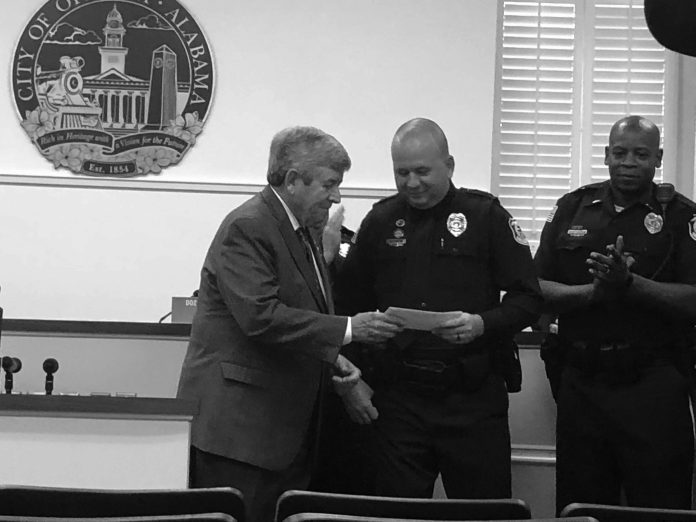 Opelika Mayor Gary Fuller presented Officer Jared Greer and his canine partner Molly with the Police Officers of the Quarter Award during last Tuesday’s city council meeting.
Greer and Molly were chosen for the award because of their service during a home-invasion incident in the 100th block of Oak Court Feb. 15, 2017.
Items and weapons used during the invasion were found by the duo and later used as evidence to make two arrests in the case.
“Jared has just done an outstanding job for us at the police department. He’s one of those steady, hardworking patrol officers who recently got into the canine unit,” said Opelika Police Department Police Chief John McEachern.
The council also selected Lower Brothers Company, Inc., a Birmingham-based construction company, to build the new pickleball courts behind the Opelika SportsPlex.
In other business, the council:
• awarded bids for projects concerning street-drainage improvement at the intersection of 5th Avenue and 4th Street and new traffic signal at the intersection of Northpark Drive and Andrews Road
• approved resolutions concerning expense reports from various departments, purchase of a pavilion for the new pickleball courts, weed abatement assessments for properties located at 12 E. Johnson Ave., 1201 Elliott Ave. and 1733 1st Ave.
• entered into project agreements with Plainsment Projects Inc. and Broadview Properties Family Partnership
• signed a tax abatement agreement with Hyundai Motor Manufacturing Alabama
• granted a request for a bike race to be held downtown July 10.