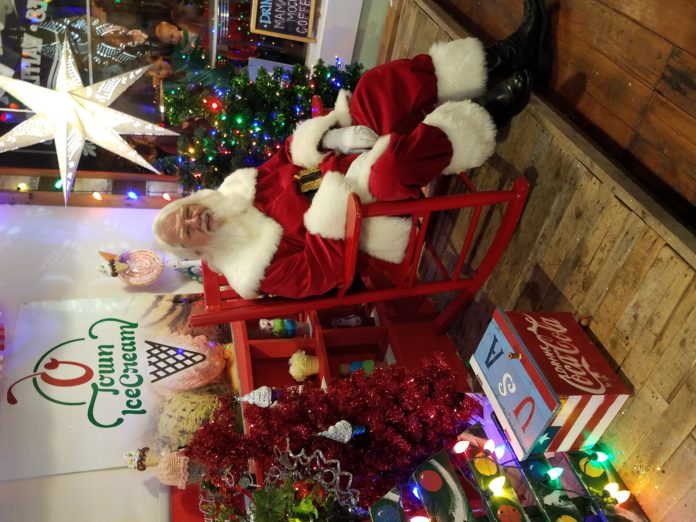 Opelika welcomed Santa Claus to town Friday night and his first stop was with O Town Ice Cream. Shop owners Chris and Angela George held their first Cookies with Santa event.
Participants from around the area including Loachapoka and Smiths Station were in attendance at the downtown ice cream parlor.
Santa took time to welcome each child and pose for photographs. Event goers also had opportunity to visit the party room where tables were laid out with cookies, frosting and and sprinkles for decorating.
Angela worked behind the counter, overseeing the event. “We had over 650 people interested in the event on Facebook,” Angela said, “and it looks like they might all be here.”
Angela, who came up with the idea, had her entire staff working to cover the event. “All of our children are helping out tonight,” she said.
The tables in the main seating area as well as in the party room were full, and the sidewalk out front was standing-room only.
The event began at 5 p.m. with Santa’s arrival and lasted until the shop closed at 9 p.m.
O Town Ice Cream will be hosting this event yearly. “I have 13 years of photos of my children with Santa over my mantle. Now I have a place to have annual photos made for years to come,” Angela said.