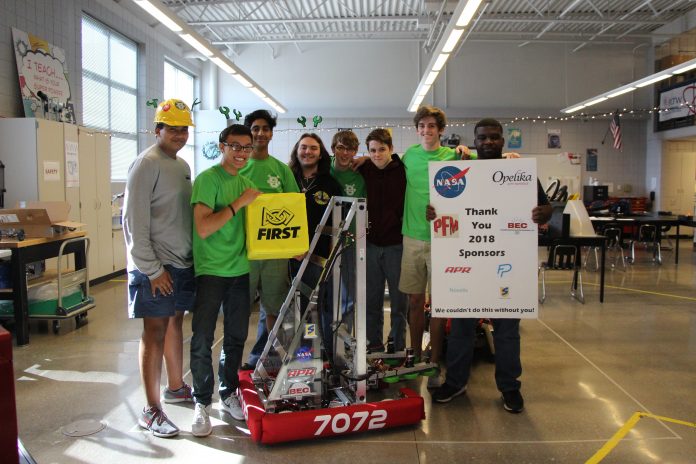 Members of Opelika High School’s O.G.R.E. (Opelika’s Greatest Robotics Engineers) program and their robot, Fiona, turned in a strong showing at a recent robotics competition in Huntsville.
The “Rocket City Regional,” a sanctioned event of the international FIRST (For Inspiration and Recognition of Science and Technology) Robotics Competition, pitted 43 groups from the United States and Brazil in a series of contests designed to challenge each other’s robots for best overall skill-set and design.
Formatted similarly to the NCAA’s “March Madness” tournament, O.G.R.E. competed as a rookie squad for both “Red” and “Blue Alliance” divisions in event brackets.
Paired with teams from Morgan County, Alabama, and Fort Dorchester High School in South Carolina, O.G.R.E.’s group dominated its first and second-round foes en route to the region final.
A back-and-forth finals matchup against a Red Alliance group ended on a controversial penalty that cost O.G.R.E’s team a victory.
“Even after that disappointing loss, our students stood up and were applauding all the teams during the awards ceremony, including the winners. I think it attests (well) to the community here in Opelika,” said O.G.R.E. Program Director Brenda Howell.
Following grant-funding approval from NASA in November, Howell said she was able to start the program.
In January, Howell, her eight students and group mentors began the six-week process of constructing Fiona.
Both Howell and her students shared what the experience meant to them.
“I enjoy everything about being a part of this program, but watching them learn and critically think are the most satisfactory things for me,” Howell said.
OHS junior Ishan Patel said the program gives him and his classmates opportunities to prepare for their desired career fields.
“Our passion for this comes from most of our group’s desire to become engineers one day, and how this will help us get more experience than just staying at home. Here, you get that hands-on experience,” Patel said. “We get to use power tools, learn to program the robot and you get to work with mentors who have done this before and learn from them.”
Beyond education is the lasting friendships created through the program, according to classmate and fellow OHS junior Rishi Yadav.
“You also get to know each (other) and become closer as a team. You have to interact and communicate effectively with each other and go through real-life circumstances together,” Yadav said.
Patel, Yadav and their classmates are preparing an electrical car for this weekend’s “Chambers County Grand Prix,” an annual competition that draws 10 or more teams from Alabama to determine whose car is the fastest.
For more information on the O.G.R.E. program and its sponsors, visit www.ogrerobotics.com.
Following is a full roster for the O.G.R.E. program:
Nic Bartlett – freshman
Garrett Bennett –
junior
Parker King – junior
Noah Mills –
sophomore
Ishan Patel – junior
Alex Rice – sophomore
Jordan Stevenson – senior
Rishi Yadav – junior
Rick Kosbab – team mentor.