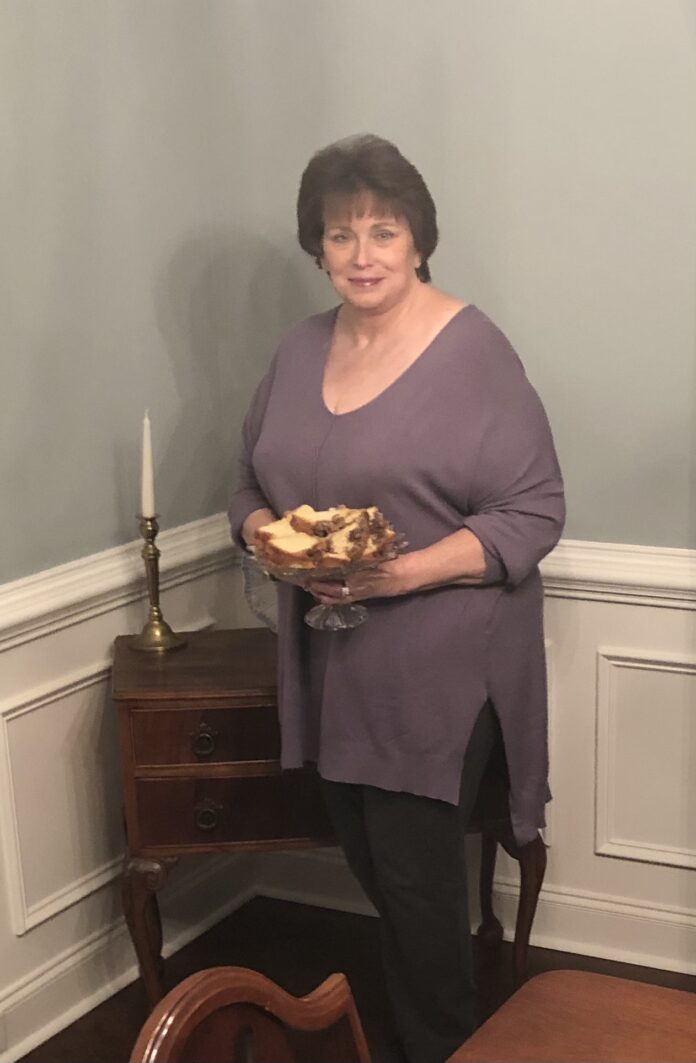 Sunday dinners at grandmother’s house with homemade ice cream and blackberry cobbler in the afternoon, breakfasts with country fried steak and family fish fry suppers are cherished childhood memories of Cindy Avery’s. She inherited her grandmother’s and mother’s love of cooking and finds being in the kitchen relaxing. Cindy especially enjoys baking a variety of delicious pound cakes to share with others.

Cindy and her husband, Houston, moved to Opelika last September from Dothan to be near their daughter, Shannon Edwards, and granddaughter, Grace, who live in Auburn. They purchased a new house in Trillium and are enjoying the area, as they make Opelika their home.

When Cindy was born, her family was living in Corpus Christi, Texas, where her father and grandfather were working with Brown and Root, a large construction company. When they built a chemical plant in Washington County, Alabama, the family moved to Jackson when she was 5 years old.

Her maternal grandparents also lived in Jackson, and her grandmother had a love of cooking. “I got my love of cooking from my grandmother,” says Cindy. “She was a great cook. There were eight siblings in my mother’s family. Every Sunday my grandmother would have the family over for big Sunday dinners after church. She would cook roast, fried chicken or chicken and dumplings.”

In the spring, when blackberries were ripe, Cindy and her family would pick the berries for their grandmother to make cobbler to serve with homemade ice cream. There were so many grandchildren that they would fuss over who was going to sit on top of the old-fashioned hand-turned ice cream maker.

Cindy has many happy memories with her cousins. Her grandparents had a big front porch with swings on each end. The cousins would race to see who could get on the swings.

Her grandmother lived three or four blocks from where she attended school. Many mornings Cindy and her siblings would go to her grandmother’s house for breakfast. She always had a pan of homemade biscuits with honey on the side. While some breakfasts could be eggs and bacon, many times her grandmother would have pork chops or chicken fried steak and gravy with rice.

Her grandmother had a red Formica countertop. Cindy would sit on bar stools to watch her cook. Her grandmother didn’t have written recipes, but Cindy managed to get the blackberry cobbler recipe.

Vanity Fair had several factories in Jackson and Monroeville and built a park with a huge swimming pool that was spring-fed. Her family would go there during summer for picnics. They would put watermelons in the cool spring to get cold. Cindy recalls how refreshing the chilled watermelon slices were on hot summer days.

After her grandmother passed away, Cindy’s mother took on being the matriarch of the family and doing the cooking. Cindy’s father and her paternal grandfather fished often. They would cook freshly caught fish, hand-cut French fries and homemade hushpuppies for family fish fry suppers.

Her parents owned a cabin in Miller’s Ferry where they would go to fish. They were in a fishing tournament, and her mother caught the largest crappie, winning the $3,100 first place prize.

Cindy and Houston met in Jackson. After high school, she attended Auburn University. After they married, the couple moved to Dothan, where they lived most of their married life. Houston worked for Michelin Tire and then started a lawn care business in 2002 at which he worked until he retired.

Cindy worked at an oral maxillofacial practice for 15 years in Dothan.

The Averys were active in their church, which was the hardest part about leaving Dothan. Houston was in charge of ushers and served on the board. Since moving to Opelika, they have been attending Trinity United Methodist.

They also miss the Wiregrass Angel of Hope memorial at the West Gate Park for parents who have lost a child. The founder, Steve Hardwick, places flowers once a month at the memorial for children who have birthdays that month. Cindy and Houston lost a little girl. The memorial is dear to their hearts.

Their other daughter Shannon has a daughter, Grace, who is 11 years old. When Shannon was growing up, Cindy made lots of cookies and brownies. She has always enjoyed making pound cake, and now bakes more cakes since Shannon is grown.

Cindy makes layer cakes as well and recently learned a method for baking the layers so that they don’t rise in the center. She takes a strip of towel, gets it wet and then wraps it around the cake pan, securing it with straight pins. She found this method on a recipe.

Having a love of baking, Cindy has been baking cakes and sharing them. She recently took her Pecan Sour Cream Pound Cake to the office at Trinity United Methodist Church, where she and Houston are attending services. It was a huge hit!

“I just love being in the kitchen,” said Cindy. “Cooking is therapy for me, and I love it when people enjoy what I cook. Most of what I cook are various recipes that were handed down in the family. I like to look at recipes and will try new dishes to share with others too. I love cookbooks and especially cherish the ones from my mother that she has written notes in the margins.”

When making pound cakes, she has the butter and eggs at room temperature. If using cream cheese, she lets that reach room temperature too before using. She really likes her Kitchen Aid mixer but treasures her grandmother’s hand mixer.

“We really like Opelika,” said Cindy. “I like the quaintness and the Historic District. We went to the Victorian Porch Tour and loved it.”

As Cindy and Houston are making Opelika their home and becoming involved in the community, be sure to give them a big welcome to our wonderful community. Just maybe, Cindy will have a slice of cake to share.