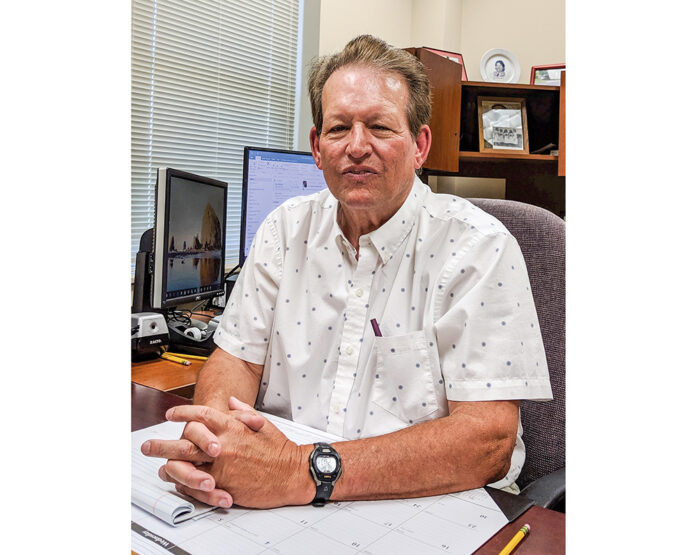 A new variant of SARS-CoV-2 was first isolated and characterized from South Africa on Nov. 9. This “variant of concern” is designated Omicron by the World Health Organization for the 15th letter of the Greek alphabet.

The virus has a “constellation” of mutations more than 50 total, of which 32 are in the all-important spike protein, which may cause the virus to be more transmissible, produce more severe disease and override existing immunity. The reason for this concern is that prior variants have had only a few mutations in the spike protein.

Scientists indicate that there is much work that needs to be done examining this variant in terms of transmissibility, severity of illness and, most importantly, whether protection stimulated by multiple doses of currently approved vaccines will provide significant protection against infection or clinical signs. Initial data from areas with a high number of positive cases indicate that the Omicron variant is more infectious than the Delta virus. However, more data needs to be collected on the incidence and severity of disease produced by this new variant in areas with a high frequency of positive cases.

All three major U.S. vaccine manufacturers have had contingency plans in place to rapidly develop new vaccines in case of the evolution of variants that could evade protection afforded by their existing vaccines.

Recent press releases from Moderna, Pfizer and Johnson and Johnson have indicated they can produce a new vaccine containing this variant or increase the dosage .of its existing vaccines early next year. The first step in developing a new vaccine overlaps with research necessary in order to evaluate whether a new one will be needed. Laboratory studies must be undertaken to determine if sera from individuals that have been vaccinated or have been recently infected with the Delta variant contain antibodies that can neutralize the new variant.

Virus neutralization tests are performed in cell culture and recorded as neuralization indices. Using algorithms, indices can predict the percent protection for a vaccine. These studies already underway by the three vaccine manufacturers will require one to two weeks to be completed. Coronavirus variants can spin off minor antigenic variant subtypes, but not major serotypes, meaning there will always be some cross-protection afforded by vaccines against new variants. Therefore, commercially available vaccines should provide some measurable protection against this new variant, however how much protection will await further studies.

If there are differences in the efficacy of the vaccines against this new variant, there could also be a reduction in the efficacy for treatment using monoclonal antibodies. However, molecular diagnostic testing should not be adversely affected because they detect more conserved regions of the virus, which are less likely to mutate. For the same reason antiviral drugs should also be effective against any variant because they target viral replication, which also reside in the conserved area of the virus genome.

Based on international experience, the Delta strain is capable of infecting those vaccinated, albeit at a lower level and with quantitatively less production and dissemination of virus. Vaccination reduces workplace and community spread of COVID. Data shows that non-vaccinated individuals have a tenfold to twentyfold probability of being hospitalized or dying, especially with co-morbidities, as compared to those who are fully vaccinated. Therefore, it is incumbent for those who have not been vaccinated to be fully vaccinated and those who have been fully vaccinated should receive a booster dose. The higher the neutralizing antibody levels in a person, the more protection they will have against variants.

The emergence of a new strain of SARS-CoV-2, irrespective of characteristics, was inevitable and was widely predicted. The probability of a variant emerging and spreading is a function of the proportion of susceptible individuals in a population.

The vaccination rates for the continent of Africa suggest that COVID is not controlled and serves as an incubator for variants. Only 1% of the population in sub-Saharan Africa have been immunized. Only 1% of the billions of doses of all COVID vaccines, which have been produced, have been administered to Africans. South Africa, the most advanced nation on the continent, has achieved a 35% administration rate among the 55 million population, but with vaccines of inferior efficacy. Since the recent identification of this virus, it has spread rapidly to seven neighboring African countries and 17 additional countries with a total 226 so far.

A number of the individuals who have tested positive for the virus and were fully vaccinated showed mild symptoms, indicating there was some protection from the vaccine. The emergence of the Omicron virus and future variants illustrates what can happen when the world has inequitable distribution of vaccines and transmission is allowed to persist at high levels in poor countries.

The immediate response to the news from South Africa was a plunge in world financial markets, with travel, entertainment, financial and oil-related stocks disproportionally affected. Many countries have rapidly restricted travel initiating from eight South African countries. However, some scientists believe the virus was circulating in a number of other countries in late October.

Travel restriction can slow, but not stop the spread of the virus. A more effective way to stop the worldwide spread of any variant would be to require international travelers to have negative test results from a molecular-based test for 24 hours prior to travel. Otherwise, we may experience the specter of more widespread shutdowns and deterioration in the economy after signs of restoration to pre-COVID normality.

The rapid spread of this highly mutated virus should reinforce the sound advice from the NIH, CDC, WHO and prominent epidemiologists in academia concerning continuation of COVID control measures. Countries should intensify efforts to raise vaccination rates by stopping the spread of misinformation on social media as well as help increase the rate of vaccine administration to residents of Third World nations.

The U.S. has been at the forefront in supplying the world with vaccine doses with about 280 million doses shipped so far, with a billion more promised by the present administration. It is axiomatic that, unless COVID can be suppressed on an international basis, industrialized nations will remain vulnerable.

Health authorities in modern countries must intensify sequencing of SARS-CoV-2 isolates to identify emerging mutations that can represent enhanced infectivity and pathogenicity and upload these sequences onto the GISAID, a global repository where the data can be quickly shared. Commonsense protective measures to prevent transmission during the upcoming winter months include masking and maintaining social distance in concentrated, confined spaces even among people who are fully vaccinated.

Free in-home test kits will soon be available in the U.S. to allow infected but asymptomatic or mildly affected individuals to self-quarantine. At least two new antiviral drugs should be cleared for use by the FDA for treatment as well as a prior approved drug for those with symptoms and having a positive COVID test. Clinically ill individuals should refrain from using unapproved treatments, including hydroxychloroquine, Ivermectin, etc., which are circulating on social media. These drugs are not only ineffective but can be toxic if taken in large amounts.

The anti-vax lies and misinformation spread by COVID-deniers and pseudo-experts and those profiting from anxiety should be vigorously opposed. A coordinated publicity campaign involving sports and entertainment personalities, civic, religious and industry leaders, scientists, public health authorities and responsible media is required. Groups that have opposed scientific measures to control COVID have contributed to the increase spread of the virus as well as the suffering, hospitalizations and death of infected individuals. This new variant is a wake-up call for the U.S. and other industrialized nations. If we wish to restore our pre-COVID way of life and economy, now is the time for resolute action.

Joseph Giambrone is a professor emeritus in Auburn University’s Department of Poultry Science with a joint appointment in the Department of Pathobiology in the College of Veterinary Medicine. During his graduate research career at the University of Delaware, he was part of a research group that developed the first vaccine against an antigenic variant of an avian coronavirus. During a sabbatical leave during his tenure at Auburn, he was part of a research group in Australia that sequenced the entire genome of antigenic variant of a coronavirus of chickens. During his 42-year research career as a molecular virologist, immunologist and epidemiologist, he has made critical advancements in understanding the ecology of viral pathogens, led efforts to improve detection and surveillance of viral diseases and developed new and effective vaccines and vaccine strategies to protect commercially reared chickens as well as pathogens, such as avian influenza viruses, which have spilled over into human populations. His research has had a profound impact on practices used today to reduce the incidence and severity of viral diseases of commercially reared poultry as well in human populations.