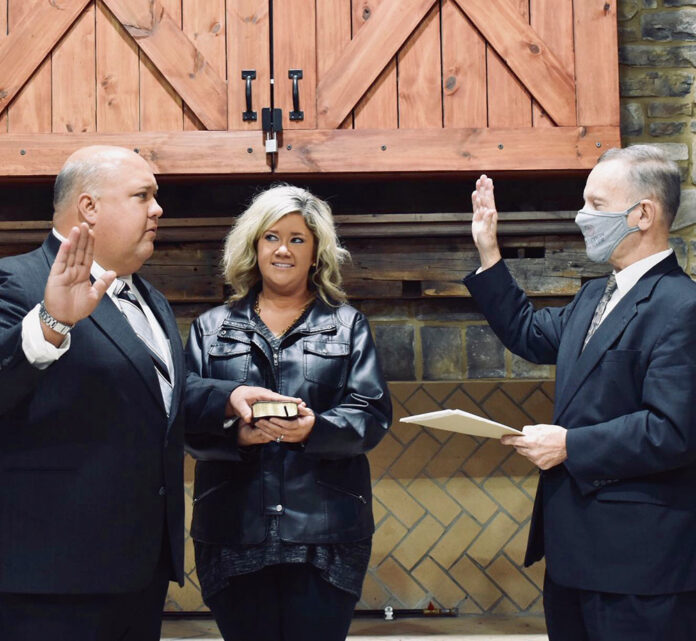 Members of the new councils for both Opelika and Smiths Station were sworn in Monday night.

“At the start of your new terms of office, both the mayor and council members are required by law to take an oath,” said Opelika City Attorney Guy Gunter. “The oath is not a mere formality. The oath is public pledge that the official understand the requirements of the office and will work to meet or exceed those requirements.”

Gunter reminded council members that their new terms in office will not be solo efforts but that the council will need to rely on citizens, staff and one another.

Retired Probate Judge Hal Smith swore in Opelika Mayor Gary Fuller, who is beginning his fifth term, and he has said, his last, in office.

“I’ve been trying to decide who had the most energy, President Trump or Mayor Fuller,” Smith said. “I’ve decided it’s a real close tie. They’re everywhere. It’s my honor to again administer to the oath of office to you mayor.”

Assistant General Counsel for the Alabama League of Municipalities Tenee R.J. Frazier administered the oath of office for Norris.

“First of all, congratulations to you and Ali,” Hughes said. “Heck of a job y’all did.”

Gunter administered the oath of office for Allen and Lofton, along with the returning council member, Eddie Smith, Ward 4.

“I am honored to be in your presence at this very unique time,” Gunter said. “This ceremony is a very important milestone for each of our elected officials. The city’s history to this point, all 166 years, has been a long and winding road. Together, you as our elected officials begin a four-year journey toward our collective vision.”

Rauch nominated Smith for re-election as the city council president during the meeting. The council voted to approve.

“I am humbled by the election and I want like to thank my fellow council members, colleagues for your potent support,” Smith said.

Following his election, Allen nominated Norris to serve as president pro tem, and the council voted to approve.

“I want to congratulate the new council members and thank you for your service to our community,” Fuller said.

Copeland, along with Council Members George Stringer, Place 1; Morris Jackson, Place 2 and Richard Cooley, Place 4 were all re-elected to their offices.

The swearing in took place before the official city council meeting.

“It’s an honor and a privilege to serve the city of Smiths Station as her Mayor for the next four years,” Copeland said on Facebook. “This is my second term and I promise to work harder this term then my previous. I am also extremely excited to be working with two new council members Victoria Currier Green and Steve Lansdon the future looks very bright for our city. Onward and upward.”