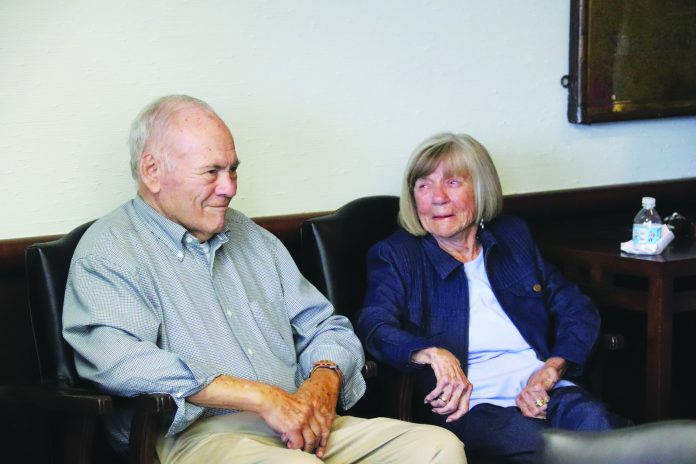 Former East Alabama Medical Center board chairman E.L. Spencer Jr. and his wife Ruth will be the namesakes of the hospital’s new cancer center slated to open next spring.
At a naming reception held July 23 at AuburnBank, EAMC President and CEO Terry Andrus explained to Spencer family members and guests the rationale for honoring the couple in this manner.
“This got started about six months ago when the AuburnBank Board of Directors decided to make a donation in honor of the Spencers for the new Cancer Center. That was followed by a magnanimous donation by the Spencer family,” Andrus said.
Andrus added that the Spencers’ involvement with the project has provided an easier way of requesting donations.
“The great thing is when you go and reach out to people and say ‘we’ve got this great state-of-the-art cancer center that we are building and we are going to name it for the Spencers, would you like to help?’ We’ve just had great response,” Andrus said. “That is because of the great legacy the Spencers have in this community.”
Laura Grill, who will replace Andrus as president and hospital CEO on Oct. 1, also spoke at the ceremony while presenting a resolution signed by the EAMC Board of Directors last month that officially names the Cancer Center in honor of the Spencers.
“I echo what Terry said in thanking you for everything you have done for this community and for this hospital … when you drive by the front of the center, it will say the Spencer Cancer Center. And, as you enter the front doors, it will say the E.L. Spencer, Jr. and Ruth Priester Spencer Cancer Center,” Grill said. “We are very, very excited to name this facility for you – thank you for all you have done.”
From 1982-2008, E.L. served on the EAMC Board of Directors, including as chairman from 1990-2008, the longest in board history.
The new center will be located at 2501 Village Professional Drive in Opelika. Nearly 60,000 sq. ft. in size, it will be four times larger than the size of the current Cancer Center of East Alabama, which opened in 1992.
Among the amenities at the new facility will be two linear accelerators, 28 regular infusion therapy chairs, 18 exam rooms, a pharmacy, a boutique, four conference rooms, a resource library and a chapel.
For more information or updates, visit www.eamc.org.