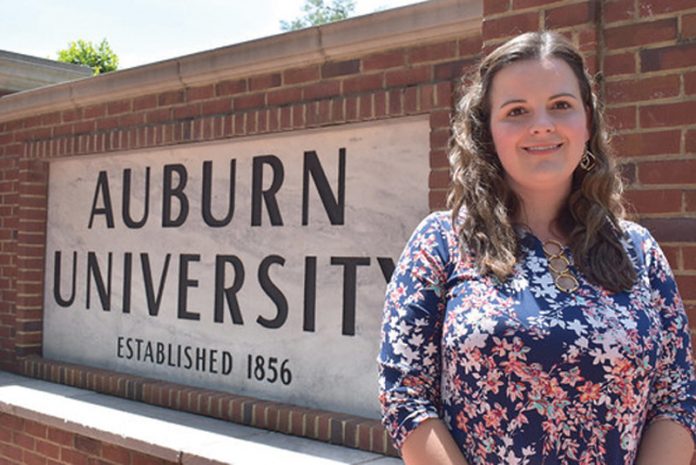 Heather Floyd was helping her two oldest children with homework last spring when her daughter, Haylee, blurted … “Mom, I want to be a veterinarian.” Fully understanding the academic rigor involved, Heather challenged her daughter with the truth. “Vet school is really difficult to get into,” she said. “You have to make good grades, work really hard and push yourself to do well.”

At that moment, Heather realized she was not just talking to a 7-year-old girl, but also to herself. “I was pushing her to reach her full potential and I’m not reaching my own,” she said.

Heather, now a mother of five, was just 25 credit hours short of earning a bachelor’s degree in management with a concentration in human resources in Auburn University’s Harbert College of Business. But marriage and family paused those academic pursuits in 2010.

“I had always wanted to finish my undergraduate (degree) and it was one of those deals where I felt like too much time had passed for me to go back,” she said. “I felt like I had missed that opportunity. My husband really encouraged me and said, ‘You ought to go back.’ We’d talk about it from time to time and I told him, ‘I don’t know if I can juggle being a mom and a student. I said, ‘Our kids are all still really young. They’re demanding of my time and energy. I just don’t know that I could give school the time that I need to study and do well.’”

But Heather’s veterinary school speech to Haylee, and ultimately herself, changed everything.

“That day I decided, ‘I’m going to pursue this thing. I’m going to reach out and contact Auburn and see if it’s possible for me to pick up where I left off,”’ Heather said. “I talked with my advisor, Satrina Kelley-Jordan, and she was just great in helping me get transitioned back in. I knew that this was my opportunity to pick up where I left off.”

Last week, Heather completed the very degree she began pursuing in 2006 and was scheduled to graduate with other Harbert College seniors on May 2. COVID-19 changed that. Instead, she plans to walk at the joint spring-summer Auburn commencement in August.

Heather Floyd is an Auburn alumnus.

‘There’s just a lot going on’

The former Heather Meadows grew up in Opelika with her childhood and high school sweetheart, David. Heather graduated from Opelika High School in 2003, earned an associate’s degree at nearby Southern Union State Community College and climbed to the ranks of executive director at the Lee County Humane Society by the time she enrolled at Auburn in 2006.

“The job at the humane society … that’s what made me want to pursue human resource management … just being responsible for the group of people there and really investing in them,” she said. “I enjoyed the business side of it so much.”

She and David were married in spring 2010. “When we got married, I left the shelter to focus on our home and family,” Heather said. “I carried my time at Auburn a little bit further until I was getting ready to give birth to our first, Haylee.”

Heather stepped away from classes at Lowder Hall and Auburn just three semesters shy of finishing.

“I intended to go back to school after Haylee, and then life just happened,” she said. “At the time I thought, ‘There’s just a lot going on.’ We ended up having five children over a seven-year period.”

Family—Haylee, now 8, David, 7, James, 5, Claire, 4, and Emily, 1—is the centerpiece of the Floyd household, according to Heather.

Whereas Heather has been busy working as a full-time mother, and most recently a student, David serves as a community hero—an Opelika firefighter.

“David has worked with the Opelika Fire Department now for 10 years,” Heather said. “He was going through rookie school when we got engaged and graduated from rookie school right after we got married. But for as long as we’ve been married, he’s also had two or three other jobs at a time.”

‘Who was going to sit with my kids?’

“My biggest concern was who was going to sit with my kids because my husband’s job is so demanding,” she said. “But my sister-in-law (Hannah Floyd) volunteered and said, ‘I’ll watch them while you go to class. My mother (Terri Meadows) volunteered to watch the kids in the fall and spring. Without them, I couldn’t have done it.

“That part was challenging, but then because I don’t live on campus, I thought ‘What’s the parking situation like? How am I going to get to class every day? How has that changed since the last time I was there?”

It had. The Village dormitories and Auburn Arena now consumes much of the space where ample commuter parking was once available. Fortunately, Heather managed to park off-campus and use the convenient Tiger Transit shuttle system to school.

There was another potential challenge—a generation gap.

“I was nervous about being a non-traditional student, how I would fit back into the campus life and what would be expected of me and if I would be able to keep up,” Heather admitted. “It turned out that Auburn was really welcoming and I was able to pick up right where I left off.”

Everything was going well and the finish line – the last week of April – was in sight. Then COVID-19 changed the way we lived, worked and studied. Auburn announced it was moving to remote instruction on March 12. Suddenly, classes were online and Heather found herself taking classes at home … with five children.

“That was definitely a challenge because with me being at home they definitely wanted my attention,” she said. “I would do my best to watch the online classes, write papers, or whatever, while they were taking naps. I tried to keep them occupied and do my best to explain to them, ‘Momma needs a little bit of time right now.’”

And then there were Zoom sessions … where everyone was live on the web.

“There were some times when my kids would pop up in my meetings with my teachers,” Heather said. “I’m sure they completely understood though because a lot of them had children of their own and were in the same boat. It was a different kind of challenge because they expected me to pay attention to them the whole time, too.”

College is hard, so it’s been said. Heather admits struggles, but tenacity mixed with encouragement won the day.

“When I was frustrated I would just look at my kids and think, ‘I can’t quit,’” she said. “What kind of example would that be setting for them? Would I be showing them that when it gets hard that it’s OK to give up? That was my motivation, and David, he was great. I would come home and he would tutor me and quiz me. He was so supportive. He really wanted me to succeed as much as I did.”

Heather and her family can look forward to the August commencement and her long-awaited walk across the stage at Auburn Arena.

“It’ll be a time to celebrate with all of those who supported me,” she added. “I couldn’t have done it by myself and there are so many people who played an important role in my success. I’ll have that sense of accomplishment, but I’ll also be humbled by the fact that there’s just so many people that care about my success and were willing to put things in their lives on hold so that I could be there on that special day.

“If there is someone out there interested in completing their degree but is hesitant like I was, because maybe they feel like they have allowed too much time to pass, go for it. It is worth it and they won’t regret it. For those who have already made the decision to go back to school, I would say, ‘Congratulations!’ You have already overcome the biggest hurdle of the process. Keep pressing forward towards your goal and when you look back in the rear-view mirror, you will be glad you did.”