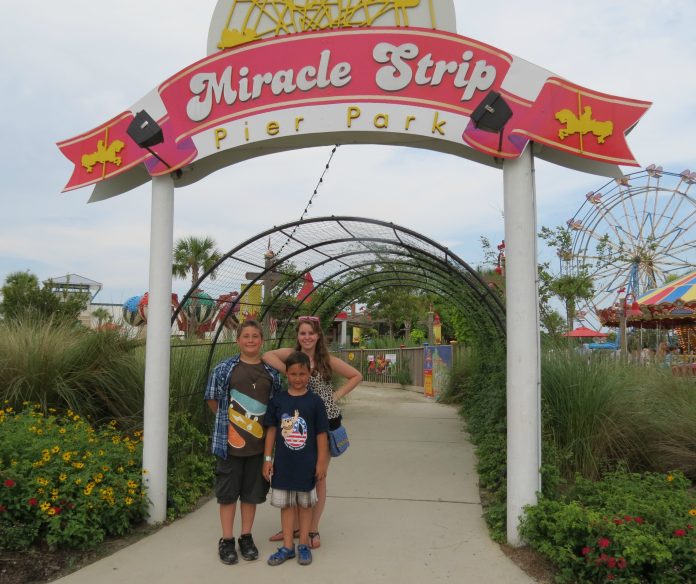 Took a trip down memory lane the other day. Drove along what Panama City Beach promoters used to call The Miracle Strip Parkway.
Or at least they did back when the road took visitors to The Miracle Strip Amusement Park.
Which isn’t there anymore.
But a lot of you remember when it was.
Back before the completion of I-65, which funnels so many Alabama tourists to Gulf Shores, Panama City Beach was the destination of choice for sand and surf lovers. It was a place where folks could get away from where they were and do things they couldn’t do back home.
And at one time or another, most folks who made the trip visited the Park. With its 2,403 foot “Starliner” roller coaster (“fastest in the world”), its arcade (with the chicken that told fortunes), the fun house, the Zoom Flume, and the Scrambler, the park put the miracle in the Miracle Strip.
Coming from rural communities in the lower South, these tourists saw the Park as a larger, more spectacular version of the carnivals and county fairs that appeared in their towns every year and then moved on. These were the folks who put the redneck in Redneck Riviera and this was the entertainment they loved.
All sorts of stories were associated with the Park.
When it opened in 1963, word got out that the rides had been brought down from Birmingham when city officials had closed Kiddieland at the Alabama State Fairgrounds rather than integrate it. Though the story could not be confirmed, it became part of Miracle Strip lore.
What could be confirmed was that the park was a great place for young folks to meet and get to know each other in the darkness of the Haunted Castle. Some of those introductions lasted and general manager Buddy Wilkes told that there were at least 8 married couples who met at the park.
But they closed it down. An unidentified buyer has bought the 20 acre site. It was valued at $1.4 million by the Bay County property appraiser’s office, but it probably sold for a lot more.
In a way, it is a miracle that the Park lasted as long as it did. Insurance coverage, lawsuits, high taxes on the prime real estate, and rising fuel costs cut deeply into profits and for the last few summers it had been running at a loss. All around it the old amusements were also sold and bulldozed. Don’t try to visit the Snake-a-Torium. Ross Allen’s Jungle Show is gone. The Top o’ the Strip tower is no more. Goofy golf courses disappeared. And many of the old motels sold out. The land was too valuable. The offers were too good. There was nothing to be gained by staying.
The closing was also the end, or at least the beginning of the end, of an era. Billy Lark, who owned the Park and sold it, was part of a family who have been developing the area since the 1930s when they put up Larkway Villas, one of the first “tourist cottages” built on Panama City Beach. Lark also developed Shipwreck Island Water Park (one of the nation’s first water parks) and many Miracle Strip employees relocated. The last time I checked it was still hanging on.
After Labor Day, 2003, Miracle Strip Amusement Park shut its doors, just like in the old days when the “season” ended in early September. But it did not reopen in the spring. Some of the memorabilia was auctioned off. A few companies expressed an interest in buying the rides and other equipment. There is even talk of rebuilding the park at another Panama City site. But it didn’t happen.
The Park’s famous carousel was moved to Pier Park, an upscale collection of shops and restaurants just down the road. Identified as the Miracle Strip Carousel, its new location reflected the shift from the carnival rides and games that once typified Redneck Riviera entertainment, to the recreational shopping and eating that attracts the elite coastal clientele that crowd the condos that crowd the beach. These folks and their children, especially their children, have little interest in a bird predicting the future for chicken feed. Stylish and sophisticated, they are not likely to be satisfied with a cold drink at the Abominable Sno’ Man. Getting scared out of their wits at Dante’s Inferno, has little charm.
It is just as well that it is gone. I have my memories. So do you. They’ll have to do.
Harvey H. (“Hardy”) Jackson, is Professor Emeritus of History at Jacksonville State University. He can be reached at hjackson@cableone.net.