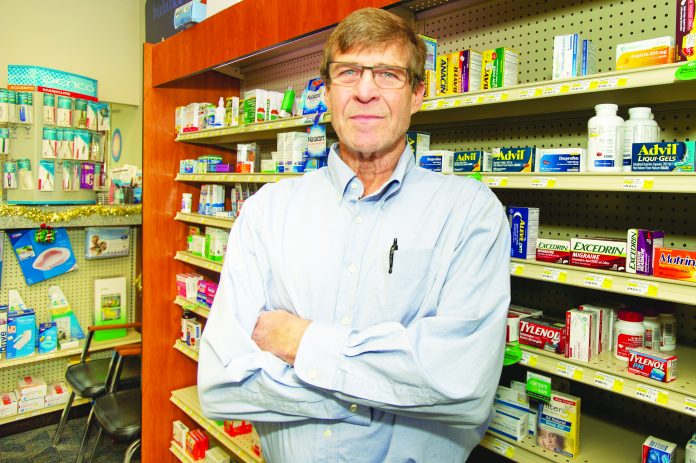 Quality care and top-notch customer service are the cornerstones of Opelika’s Medical Arts Pharmacy, which is celebrating its 50th year in business.
Following several stints at other pharmacies, including a 13-year career with Central Pharmacy in downtown Opelika, Alabama Polytechnic Institute graduate Louie Miller opened Medical Arts Pharmacy in 1968. Fifty years later, the business remains in the Miller family under the leadership of his son, Dennis.
A 1971 graduate of Opelika High School, Dennis followed in his father’s footsteps at Auburn University (previously known as the Alabama Polytechnic Institute) and enrolled in pharmacy school. Finishing in 1983, he began working in his father’s business as a pharmacist the day after graduation.
Starting in the family business at 15 years old, Dennis said his daily duties consisted of prescription deliveries, stocking shelves and whatever else needed to be done.
“I did a little bit of everything,” Dennis said.
The father-and-son duo worked together for the next 10 years before Louie passed the business down to Dennis in 1993.
“There wasn’t a day after I took over that I didn’t ask him for advice or help on something,” Dennis remembered.
Despite the rapid amount of change during the last 50 years, Dennis said the primary tenets of the business have remained firm.
“We try to make personal customer service our number-one priority. And we’ve been able to retain that look and feel of a small-town drug store,” Dennis said. “We’ve got a little bit of everything, and specialty products that not many other stores carry.”
Keeping in step with the digital era, the pharmacy recently launched an app available for Android and iPhone users that will streamline the prescription-filling process for its customers.
“This will help save us time and we won’t have to talk on the phone. It’s a little more specific and helps the customer pinpoint what they’re looking for,” Dennis said.
Along with Dennis, two other full-time pharmacists are employed at the pharmacy: his son Scott and Susan Nolen.
In addition to helping people heal and recovery from injury or sickness, Dennis said he and his staff enjoy the relationships they build with their customers.
“We’ve got customers who are the fifth generation in their family to support our business. It’s really cool to see that doing business with a place like us can be passed from generation to generation,” Dennis said.
The pharmacy’s hours are 8:30 a.m. – 6 p.m. Monday-Friday. For more information, visit www.medicalartspharmacy.com or call 334-745-5756. It is located at 121 N. 20th St.