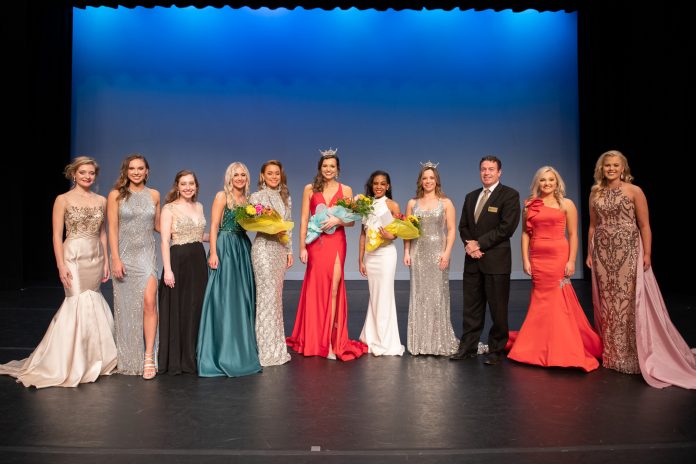 McKenzie Gay of Woodland was crowned Miss Southern Union 2020 during the college’s annual pageant held Jan. 16. Gay will now go on to compete in the Miss Alabama Pageant which will be held in Birmingham in June.
This year, nine young women competed for the title of Miss Southern Union. Contestants were judged in private interview, talent, eveningwear and on-stage question. In addition to each of the judged categories, contestants are required to select a platform, choosing a topic in which they are currently involved or about which they feel strongly, such as a form of community service.
Grayson Harris of Prattville was named the winner of the talent competition. Nakayiah Hall of Childersburg was named as first runner-up and Kaylee Dobbs of Eufaula was named second-runner up to Miss Southern Union. Also competing in the pageant were Claire Ward of Ranburne, Kallie Hester of Auburn, Emma Huddleston of Wedowee, Kaylie Murphree of Tampa, and Laney Skipper of Taylor.
The Miss Southern Union Pageant is an official preliminary of the Miss Alabama/Miss America Pageant.
For more information or to schedule an appearance by Miss Southern Union, contact Shondae Brown, director of the Miss Southern Union pageant, at 256-395-2211.