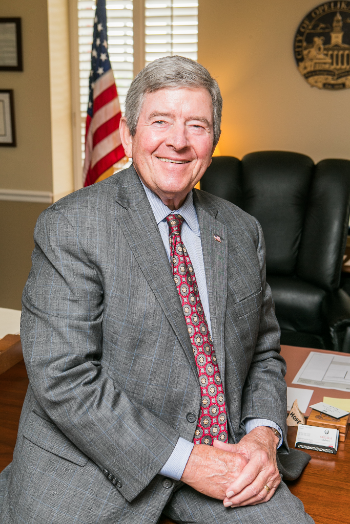 Opelika Mayor Gary Fuller will participate in the Alabama League of Municipalities’ Media Luncheon Feb. 19 from 11 a.m. – 1 p.m. in Montgomery.
State city officials, as well as members of the group’s advocacy team, will be in attendance at the luncheon, which will be held at the league’s headquarters in downtown Montgomery. Fuller, as well as mayors and representatives from the cities of Athens, Bessemer, Guntersville and Montgomery, will speak and give interviews during the event.
Following are some of the issues that will be addressed during the luncheon:
• Infrastructure
Funding
The need for additional infrastructure funding has been debated the past two legislative sessions and continued to be studied by the Joint Legislative Infrastructure Study Task Force since the conclusion of the 2018 regular session. Their recommendations would add an additional motor fuel excise tax of 6 to 12 cents onto each gallon of motor fuel and place an annual license fee in the range of $100-$150 on vehicles using hybrid or electric engines. Task force members and stakeholders agree that this is needed to address infrastructure demands for ongoing maintenance as well as expansion of current roadways. Where the league membership takes issue is in the distribution of new funds. The current distribution formula was implemented in the 1960s and does not reflect the 2019 demographics of Alabama. Cities and towns are where 65 percent of Alabama’s citizens live, work, shop and find entertainment, yet the current proposals would only provide a meager 10 percent of the distribution to municipalities. The league and its municipalities are advocating for a change to the distribution of local funds to provide an equal distribution of all local (cities and counties) motor fuel tax funds.
• Collections
In 2016, the league worked with state and county officials to implement the Simplified Sellers Use Tax program allowing for the voluntary collection and remittance of sales taxes to Alabama by out of state on-line retailers. This program generated more than $60 million in 2017 with $15 million for municipal governments. In 2018, the league amended the SSUT laws to include the collection of sales tax by marketplace facilitators – which are basically on-line malls hosted by national retailers. These additional collections should increase to approximately $120 million in 2019.
Additionally, the US Supreme Court provided a ruling this past summer that seems to allow for the mandatory collection and remittance of sales taxes by online retailers, as long as the process is simple and non-discriminatory to the retailer. They believe their SSUT statute will allow Alabama to implement the mandatory provisions in the 2019 Session. The league will advocate for the mandatory implementation of SSUT with an additional one cent added to the existing 8 cent tax to be distributed directly to local governments.
• Unfunded Mandates
League members believe there will be several proposals in 2019 to preempt or exempt sectors of the business community from paying municipal business licenses or collecting and remitting municipal sales taxes. Pharmacies and other businesses regularly lobby the Legislature to decrease their business license responsibilities. In addition, each year bills are introduced that would hinder municipalities from managing the resources in their communities and push the financial burden of administering programs onto our cities and towns. Several employee groups continually lobby for enhanced benefits to be paid by their employers. ALM has also vehemently opposed legislation that would preempt policejurisdictions. We expect to defend against similar proposals in 2019. The league will advocate against any unfunded mandates on municipal governments.
• Employee Liability
During the last few years, league members have noticed a major shift in municipal litigation with lawsuits now aimed directly at municipal employees for accidents that occur in the workplace. Plaintiff lawyers have included municipal employees as co-defendants when suing the municipality on behalf of a plaintiff. In several cases, state courts have ruled these employees are exposed to liability via on-the job accidents. This has jeopardized the financial security of municipal employees. The league advocates for placement of municipal employees under the protection of the municipal liability caps.