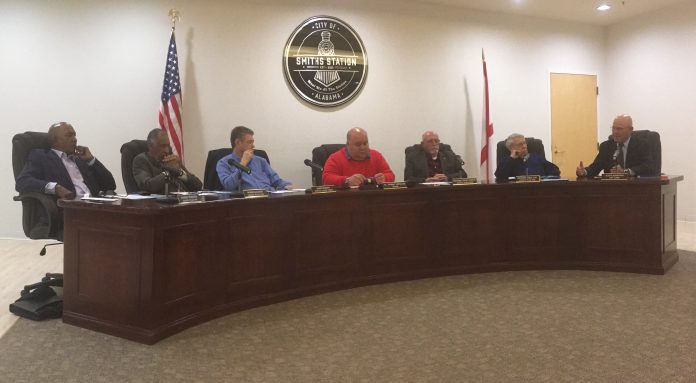 City of Smiths Station Mayor Bubba Copeland announced that the Government Center will be receiving a new addition in the coming weeks during the work session of last Tuesday’s council meeting.
In the government center’s lobby area, Copeland said a “miniature library” will be created, which will be equipped with two desks and computers for citizens and students alike to have internet and printer access.
“The future of libraries is sadly going away from a place with books to a place where people print things and do collaborative work. It’s going to look like a hotel lobby once we’ve finished the project,” Copeland said. “A student can write their term paper here or take care of an important piece of business. It’s just a way for us to give back to the community and have something of benefit that they can use.”
Copeland also updated the council on the latest news pertaining to the city’s youth baseball leagues, which is now under new leadership. With new Dixie Youth League Director Jason Stewart in place, Smiths Station will now offer access to competitive baseball leagues for 4-18 year-old residents.
“We’ve been losing a lot of kids to Phenix City and Russell County, and this now will be a way to help keep them from leaving here,” Copeland said.
In other business, the council:
– approved October’s business reports
– heard an update from City Clerk Scott Johnston on the city administration’s first meeting with ESG Engineering
– heard an announcement from Copeland regarding the postponement of the planning commission’s Dec. 4 meeting to Dec. 6 at 7 p.m. E.S.T. and a new “Firemen of the Year” award which will be presented during the city’s employee Christmas gathering
– heard an announcement from Copeland that the city is in the process of hiring a part-time parks and recreation director.
The Smiths Station City Council meet on the second and fourth Tuesday of each month, with a work session beginning at 5:30 p.m. E.S.T. and regular meeting at 6 p.m. Their meetings are held in the council chambers within the Smiths Station Government Center, which is located at 2336 Lee Road 430. For more information, call 334-297-8771.