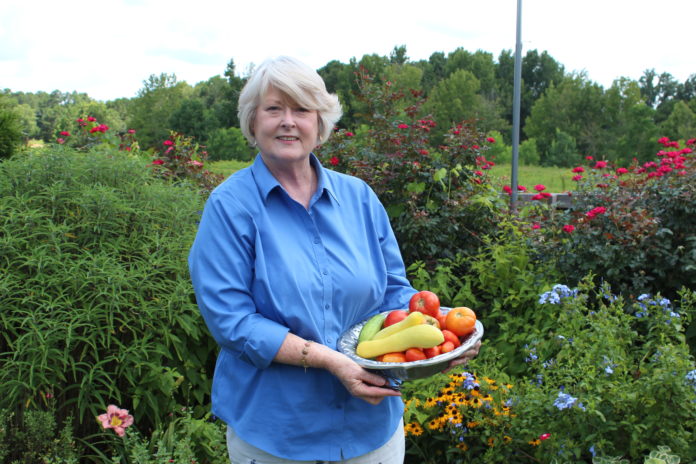 Sitting on her sun porch, Dianne Wages looks out over her garden to the Black Angus cattle in the pasture beyond. Seeing the cattle reminds her of growing up in Sumter County where her father was a cattle farmer.  Her garden, named “Childhood Memories,” also reminds her of those happy days with the flowers, a Purple Martin birdhouse, wooden gate and bottle tree.

Dianne has collected plants from her childhood days and every place she and husband Theo have lived. She also has flowers from friends, including lilies from the Cahaba River and special day lilies from the garden of Coach Shug Jordan’s wife Evelyn. A neighbor of the Jordans was given the day lilies and divided them, sharing with the Master Gardeners.

Along with the flower garden, Dianne also has a vegetable and herb garden. When she was growing up near the Mississippi line in the western part of the state, Dianne enjoyed being outdoors and helped her father work in the garden.

Dianne remembers wonderful meals served at noon for dinner with the table laden with fresh vegetables, beef dishes and also venison at times since her family also hunted. Her father raised Charolais cattle.

Her mother was a good cook as was one of her grandmothers, “Miss Lucy,” who ran the Bellemy Hotel in Sumter County. The restaurant at the hotel was a popular for Sunday dinners. Her grandmother made Caramel Icing for a cake every week.

While they were excellent cooks, Dianne learned more about preparing dishes from the family maid who did most of the cooking. She would watch her in the kitchen and developed a love of baking.

Dianne and Theo met when he attended the University of West Alabama in Livingston. Theo, who is from Birmingham, attended Auburn for a short time and then joined the Army. He was sent to Germany and played football for the Army for two years.

When he returned to Alabama, Theo attended the University of West Alabama.

After her junior year in high school, Dianne attended Mississippi State College for Women, now MUW. She then received a master’s degree at the University of West Alabama.

Dianne and Theo married while they were in graduate school. Their son Trey was born in Livingston. A few years later they moved to Tuscaloosa where Theo worked with ODECO, an off shore drilling company. He worked internationally on the oil rigs in industrial relations.

After the downturn in the oil industry, Theo taught in continuing education at the University of Alabama.

While in Tuscaloosa, they went back to Sumter County often to attend barbecues. “The Barbecue Clubs were started after the men came home from WWII,” says Dianne. “They were all young men and would get together with their families once a month to barbecue whole hogs. They built community houses, which are still being used by third generation members.

“We belonged to the Emelle Barbecue Club,” adds Dianne. “I wanted Trey to have the experience of those clubs.”

Dianne’s mother would prepare Butterscotch Pie as one of the desserts at the barbecues. The Chocolate Pie recipe is from Dianne’s cousin whose son owns the Diamond Jim’s Steakhouse, which was noted recently by Southern Living as among the best in Alabama.

In Tuscaloosa she became involved in a ministry with a caterer to entertain young women in the church with luncheons. Since Dianne’s home was spacious, the luncheons were held at her house, as she also had lovely china and crystal for 20.

Dianne prepared the appetizers and desserts, while the caterer cooked the entrees. “There was a waiting list,” says Dianne. “We were inclusive, and the church worked with us to provide childcare.”

She would work in the kitchen as well as at every church they attended before moving here.

Dianne was busy and taught anatomy and physiology at high school in Tuscaloosa. When she retired, she did adjunct work for the University of Alabama to supervise student teachers and also worked with tutoring programs at another school.

When both the Wages retired, they moved to the area in 2013 to be near their son, Dr. Trey Wages, an anesthesiologist at East Alabama Medical Center, and his family. Dr. Wages and his wife Wynne have four children, Ted, 18; Anna Louisa, 15; Tanner, 12; and Wake, 8.   Trey and Wynne both attended Auburn University and wanted to return to raise their family.

“We have enjoyed being a part of our grandchildren’s lives, “ says Dianne. “It was always Ted’s dream to go to West Point.”

At Ted’s going away party, his mother gave everyone small plastic soldiers to set around their home as a reminder to pray for him and members of the Armed Forces.

At her home, Dianne feels looking out over her garden and pasture is coming full circle. She is sharing a variety of favorite recipes from her family, as well as ones she prepares with fresh vegetables from her garden.

Tommy Lou’s Tomato Pie
5 tomatoes, peeled and sliced (Roma work best)
10 fresh basil leaves, chopped
1/2 cup chopped green onion or red onion
9-inch pre-baked deep dish pie shell
1 cup grated mozzarella
1 cup grated cheddar
3/4 cup mayonnaise (or half mayo, half Greek yogurt)
2 Tbsp. freshly grated Parmesan cheese
Salt and pepper
Preheat oven to 350 degrees.
Place tomatoes in a colander in the sink in 1 layer. Sprinkle with salt and allow to drain for 10 minutes. Use a paper towel to pat-dry tomatoes and make sure most of the excess juice is out. (You don’t want juicy tomatoes or your pie will turn out soggy).
Layer tomato slices, basil and onion in pie shell. Season with salt and pepper. Combine the grated cheeses and mayonnaise together. Spread mixture on top of tomatoes and sprinkle Parmesan cheese on top. Bake for 30 minutes or until lightly browned.
Serve warm cut into slices.

Boudro’s Famous Guacamole
This is my favorite guacamole that is served at Boudro’s restaurant in San Antonio, Tex.
Juice of 1/4 of an orange
Juice of 1/2 of a lime
1 avocado, seeded and scooped out of skin
2 Tbsp. roasted and charred Roma tomatoes, diced
1 Serrano pepper, roasted, seeded, diced
1 tsp. chopped cilantro
Coarse salt or sea salt to taste
Squeeze juices into a bowl. Add avocado and coarsely chop. Add onions, tomato, pepper and cilantro; fold into avocado mixture. Add salt. Mixture should be chopped not mashed.

Frozen Whiskey Slushies
I have been making these 30 years for parties.
12 oz. frozen lemonade or limeade
12 oz. blended whiskey
36 oz. unsweetened tea
Mix all ingredients together in a plastic bowl and freeze for 24 hours before serving.
Serve in old fashioned glasses with a slice of lemon or lime. Can be made with gin or vodka.