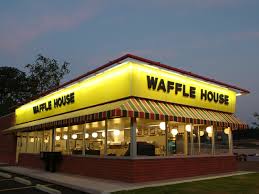 Waffle House is quiet this time of evening. The sun has set. I’m on my way back home from Montgomery.
There are eighteen-wheelers in the abandoned parking lot next door. Most of the world is winding down for the night.
My waitress has a weathered face. At first glance, I’d guess she’s old. But she’s not old. Just weathered.
She asks what I want. I order three eggs, bacon, hashbrowns, toast.
“White or wheat?” she asks.
“Surprise me.”
She reads my order to the cook. I never get tired of hearing them do that.
A kid is mopping the floor. He’s tall, skinny, tattoos on his neck. He looks like he just graduated.
You mean he KICKED you OUT?” the kid asks the waitress.
“No,” she says. “I left.”
“Really?”
“And I ain’t going back to him. I’ll sleep in my car if I have to.”
The kid leans on his mop. He has a young face.
He says, “You could stay with me and my brother. I can sleep on the couch.”
She smiles. Her teeth are stained, she has lines on her face, but she is handsome.
“That’s real sweet, E.J.,” she says. “But I can’t.”
“Well, you CAN’T sleep in your car.”
“I’ll be fine.”
“C’mon,” he says. “We got Netflix and everything.”
My food’s ready. She hands me my plate and asks if I need anything. And because I’ve eaten enough Waffle House food to own stock in the corporation, I know exactly what I need.
“Ranch, please,” I say.
The kid goes on, “My stepdad used to cheat on my mom, too. She SHOULDA left him, but every time we’d leave, we’d always end up back with him, ‘cause we didn’t have nowhere to stay.”
The woman brings my packet of ranch. I drown my hashbrowns within an inch of their lives.
“I’m not gonna impose on you and your brother, E.J.” she says. “Please don’t worry about me.”
“You’ll have your own bathroom and everything. We’re really good guys, I swear, just for tonight.”
She laughs. She’s probably thinking what I’m thinking: youth.
She asks if I need anything else. More ranch. A warm-up on coffee. I explain that I am fine as wine in the summertime.
So, she hands me my ticket and wanders outside for a smoke. I see her through the window, lighting up.
The kid follows. He’s still pleading his case to her, talking with his hands. She lets him carry on.
Then, her dam breaks. She places her head in her hands. The kid wraps his arms around her. They stand like that for several minutes.
They walk inside.
She’s removing plates from my table, asking if my meal was okay. She smells like menthol lights.
The kid is dialing his cellphone. “Hey Nick,” he says. “I need you to go to Walmart and buy some new sheets for tonight.”
He finishes his conversation and hangs up his phone. He’s pushing a mop again.
“Thank you, E.J.,” she says.
“You ain’t gotta thank me. I just wanna help.”
Well.
You did, E.J.
Sean Dietrich is a columnist, and novelist, known for his commentary on life in the American South. His work has appeared in Southern Living, the Tallahassee Democrat, Southern Magazine, Yellowhammer News, the Bitter Southerner, the Mobile Press Register and he has authored seven books.