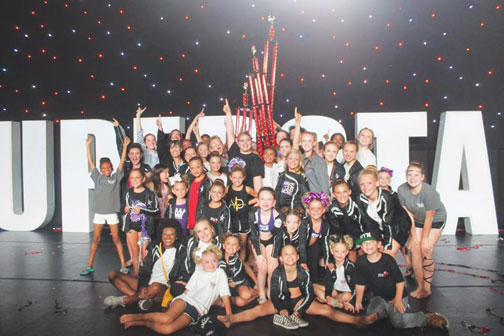 Members of Opelika’s Make Your Move studio returned home from this month’s Star Systems National Dance Competitions in Myrtle Beach, S.C., as national grand champions.
Taking top place overall in seven different categories, Mandy Moore, owner of Make Your Move, said everyone had a chance to bask in the spotlight.
“We were thinking if we had one team win overall, that would be great. But the best feeling was knowing that our two productions both won, which covers every kid and every family from our studio. It was a great culmination of the competition season, with everybody having a chance to be celebrated,” Mandy said.
Though this was Make Your Move’s most successful competition in terms of awards, its reputation for putting out top-notch dancers began nearly 23 years ago.
Mandy and her sister Jaime are the daughters of long-time dance teacher Marty Moore, who has been involved in dance for many years.
The Moore family, which has deep roots in the Memphis, Tenn. area, moved to Auburn when Mandy and Jaime were children. Marty operated a dance studio in Auburn for a time before they moved back to Memphis in 1988.
During their time in Auburn, a parent of one of Marty’s students, Beth Smith, became friends with the Moores. In 1993, Mandy received a call from Beth, asking her to return to teaching dance. Mandy accepted, and with the help of her best friend, Blayne Alsobrook, they opened Make Your Move in Auburn’s Flint Crossing Shopping Center.
The studio changed locations several times over the next few years, and eventually made its way to Opelika in 2004.
Jaime pursued her own dreams in dance, and attended Columbia State Community College on a dance scholarship.
After graduation, Jaime worked as both a choreographer and dancer for dance studios across the country, in places like Cincinnati, Ohio and Phoenix, Ariz. In 2004, when Mandy relocated to Opelika, she called Jaime to ask her come help her run the studio.
“I told her I would be here three to five years, and here I am 12 years later… still here,” Jaime said laughingly.
Now, the sister’s studio is located at USA Town Center shopping plaza off Fox Run Parkway. According to Mandy, Opelika’s central location is a reason why they have students from places like Beauregard and Beulah, which she says gives great variety to the types of students she teaches.
Both Mandy and Jaime help teach dance, Jaime’s strong suit is choreography, and, according to Jaime, Mandy’s other talent is handling the business side of the operation.
“I don’t like to do that stuff, but Mandy is great at it. I like to be in there helping set up things and putting our dance routines together,” Jaime said.
In past years, Make Your Move has been recognized as one of the nation’s top dance studios, and Mandy as one of the top dance instructors in the country. When asked about her’s and Jaime’s teaching philosophy, Mandy said they like to keep it simple.
“We view this studio and everybody involved as one big family, and we try to make it feel that way. We’re not like the teachers you see on TV who are so horrible to their kids,” Mandy said. ”We just inject ours with tough love during the week of competitions, but all the time we are teaching them to be thankful for having the chance to dance every day and do what they love. Our hope is to give back to them, and hope it gets back to them tenfold.”
Aside from being able to relate to the students, Mandy said her’s and Jaime’s chemistry in running Make Your Move is undeniable.
“Jaime is like one side of the brain and I’m the other. That’s kind of how we work…we work together,” Mandy said.
With the recent success and a continually growing student body, Mandy and Jaime both are optimistic about the business’s growth and future.
“I want to one day have our own building, so I can design it based on what we want and need, but that’s something definitely down the road right now,” Mandy said.
Jaime said she wants to see the talent they are producing to keep improving.
“We want to keep moving our levels up. Two years ago, when we won the award for best studio, we were at beginner level. This year, we won the intermediate level. Our next goal is to hit that elite level, and crush it,” Jaime said.
For information about the studio and dance classes they offer, call 705-0205 or visit www.makeyourmovedance.com.