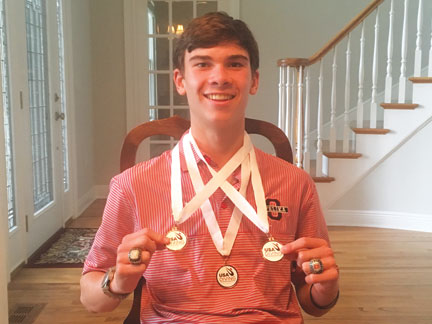 Coming off a top-10 finish at the USA Diving Championships in Tallahassee, Fla., earlier this month, Opelika High School sophomore Conner Pruitt is making quite the splash into the diving scene.
Starting at the age of four, Pruitt’s involvement in gymnastics and swimming would set the stage for his later diving success.
“He joined a swim team at four, and started doing gymnastics at five,” Debra Pruitt, Conner’s mother, said. “Whenever he would dive at swim practice, you could just tell he was a natural. His experience with trampolines at gymnastics and his natural limberness really helped him with learning how to dive.”
Over the next five years, Conner moved rapidly through both his swimming and gymnastics programs, and at 10-years-old, found himself at a crossroads in regards to the path his athletic career was taking him.
“Once I finished level 10 in my gymnastics class, I couldn’t really go any further in my gymnastics without committing fully to it, and giving up swimming wasn’t something I was willing to do,” Conner said.
After conversations with his gymnastics coaches about his next move, Conner and his parents agreed on diving as his next athletic venture, and upon starting the 6th grade, Conner also began his diving career.
“There were things like hand-circling motions and the timing of my jumps that were different in diving from gymnastics,” Conner said. “But having that experience with trampolines and gymnastics really made it simple for me to adjust to diving.”
From the start of his diving career, Conner immersed himself in his new sport, and was inspired by the likes of Olympian Tom Daley and current Auburn University diver Pete Turnham.
“Seeing Tom’s highlights, a 15-year-old kid win the FINA World Championship, was very inspirational to a young and aspiring diver like me,” Pruitt said. “Also, I had the chance to work with Pete Turnham and other local high school guys, who were all in high school then. But Pete was a kind of mentor for me, and was somebody I looked up to.”
In addition to having a solid group of older divers to learn from, Conner has also had the opportunity to be under the tutelage of one of the sport’s most proven coaches, Auburn University diving coach Jeff Shaffer.
“It’s pretty crazy to think that I work with someone like Coach Shaffer, who has such a diving mind,” Conner said. “When you’re at practice with him, you can see that his mind is always working and he is constantly offering me and others solid advice to help us get better.”
Coach Shaffer’s resume speaks for itself. Multiple national championships, dozens of champion divers, and Coach of the Year recognitions from the NCAA and SEC multiple times. And in all the years he’s coached, he’s seen few better than Conner Pruitt.
“Conner is an unbelievable kid and diver,” Shaffer said. “He works hard and his gymnastics background and raw, natural ability have enabled him to enjoy the success he has had. I consider him one of the best I’ve ever coached, and ultimately, his talent is good enough where I can say that it is up to him how great he becomes and how far he goes.”
In review, Conner’s most recent successes have included winning back-to-back Alabama state-diving titles and having three top-10 event finishes in his most recent USA Diving competitions. Considering all of his diving successes, Conner said he still maintains the typical high school student life.
“Whenever I’m not diving, I’m at school sitting in class or studying, playing tennis, doing show choir or hanging with friends,” Conner said. “It’s a busy schedule, but I feel that I am able to balance things pretty well.”
As a high school sophomore, Conner still has a little ways to go before considering his future after graduation. But, he said he has goals in place that he is working toward.
“I try not to get too far ahead of myself, because I still got a lot to prove and ways to go,” Conner said. “But ultimately, I hope I can make it to an SEC school, and maybe win the SEC and make it to nationals. That would be a dream come true for me.”
Thanks to his top-10 results in the previously mentioned USA Diving Regionals, Conner is moving on to the next round, the USA Diving Zone B Meet, held in College Station, Tex., on the campus of Texas A&M from July 6-9.