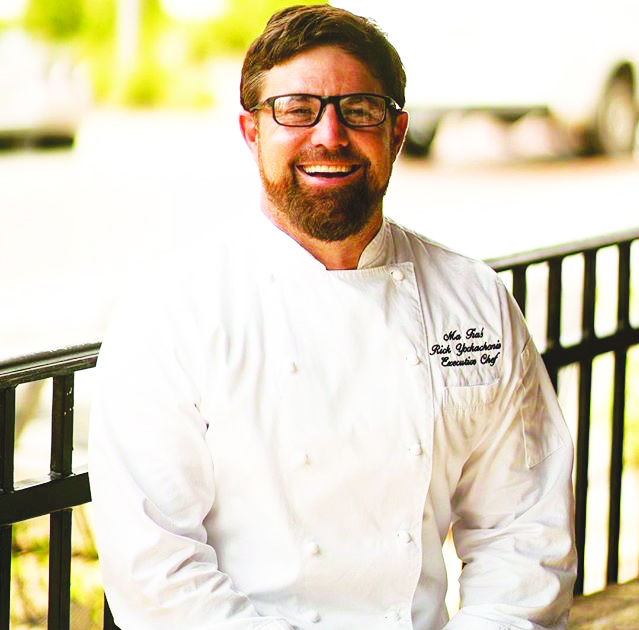 For MaFia’s Ristorante owner and executive chef Rick Yockachonis, each plate of food he prepares is an opportunity to showcase his artistic talents and creative mind.
“Cooking is one of the few things I’m good at, so I enjoy presenting something that I feel like is a good representation of me. It’s not only something I’m passionate about, but something I put my pride in,” Yockachonis said.
Growing up, Yockachonis said he handled most of the family cooking duties, which eventually became more of an outlet than a necessity as he grew older.
Instead of pursuing a culinary degree after high school, Yockachonis took a three-year apprenticeship at Robbie’s on the Beach, an upscale dining restaurant in Litchfield Beach, S.C., where he said he learned the ropes of cooking.
After completing his apprenticeship, Yockachonis joined Carolina’s in Charleston, which was once known by locals as one of the city’s best restaurants.
Following several stints with Southwestern and Italian restaurants in Dothan and Auburn, Yockachonis said he and his family relocated to Opelika in the early 2000s.
In 2010, Yockachonis said he was approached by Irish Bred Pub co-owner Joe Garofalo to help open an Italian restaurant in downtown Opelika.
Opening for business in November 2011, Yockachonis said the restaurant’s early reputation was built on its romantic atmosphere and delectable food.
“To be honest, since I was taught the way that I was, I wasn’t locked into a certain way of doing something. So we tried to make things that were super unique and super nice and robust and flavorful,” Yockachonis said.
Both the restaurant’s name and menu have changed during the past six years. Originally called MaFia’s Ristorante and Pizzeria, the business dropped the ‘Pizzeria’ part of its name in recent years to reflect its change in menu.
Yockachonis said the MaFia’s menu intentionally departs from the norm in Italian cuisine, and includes offerings like Rabbit Ragu, Pear and Gorgonzola Ravioli and Grilled Angus Ribeye with a Smoked Tomato Risotto.
“I hate stereotypes, and with that, we avoid making things as they ‘should’ be. For example, we took cannoli, and deconstructed it, and made it our own,” Yockachonis said. “We just keep trying to introduce things that aren’t 100-percent Italian but are similar enough so we can keep our menu fresh.”
Beyond the food and menu is the restaurant’s romantic ambience and solid customer service, elements that Yockachonis said help create for a memorable dining experience.
“It’s kind of like the engine of a car, where the room, the food – all of those are things that work together, in concert, to help our customers have the best possible experience,” Yockachonis said.
In addition to MaFia’s, Yockachonis and his wife Diane also own and operate the downtown Jim Bob’s, which they purchased from the Ferrell family in 2012.
Outside of work, Yockachonis said he enjoys spending time with his family and taking Muay Thai lessons.