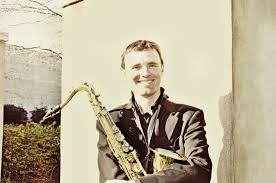 This Friday from noon to 1 p.m., saxophonist Patrick McCurry will perform a free concert with his jazz quartet at the Southside Center for the Arts, located at 1103 Glenn St. in Opelika. Performing with McCurry will be Dan Mackowski on guitar, Jason DeBlanc on bass and David Zuwiyya on drums.

The performance is the final offering of the six-performance Friday Free Concerts series presented by East Alabama Arts.

McCurry played his first professional gig at age 17. Since then, his music has supported hundreds of local and regional groups in the Southeast from New Orleans to North Carolina. He has also appeared on stage with a few well-known artists such as Rosemary Clooney and composer Richard Kingsmore, and is now based in Auburn where he grew up.

McCurry studied jazz in New Orleans at Loyola University. While there, he worked and performed with visiting jazz greats Clark Terry, Phil Woods, Peter Erskine, John Fedchock and Jiggs Wigham, as well as that city’s jazz masters Al Beletto, Tony Dagradi, Michael Pellera and Johnny Vidacovich. He earned a master’s degree in chamber music from the University of North Carolina School of the Arts in Winston-Salem, where he studied with James Houlik, a pioneer in concert saxophone music.

McCurry says Friday’s program will include mostly jazz standards, but that even that is a very broad description of the music.

But, he says other works that are now considered standards were written in the 60s and 70s and 80s.

McCurry says common jazz songs like “All the Things You Are” written in 1939 by Jerome Kern and Oscar Hammerstein, II were not originally jazz tunes. That one came from the musical, “Very Warm for May.” But, McCurry said it was soon after that re-imagined by jazz giants like Charlie Parker and Dizzy Gillespie and is still played.

“It’s played a lot,” McCurry said, “But it’s very flexible, so you can adapt it to your own style pretty easily.”

Other works like “Time Remembered,” written by Bill Evans in the 60s, were composed for jazz musicians to improvise over.

“Ultimately, that’s what it’s all about,” McCurry said. “Can you use the bones of a tune, no matter how old, to create or inspire something that is new?”

Friday’s program will include some standards and also some originals written by members of the quartet. Listeners might even hear a hymn or a country tune.

McCurry teaches saxophone at Alabama State University in Montgomery, is an arts writer and presents and promotes music in the community. Since 2010, he has coordinated “A Little Lunch Music,” the weekly free-concert series at the Jule Collins Smith Museum of Fine Art. He also coordinates Friday Free Concerts.

Mackowski played in rock bands while pursuing undergraduate and graduate degrees in physics and mechanical engineering. His current musical interests are in arranging originals, classic jazz standards and big band tunes for the solo fingerstyle guitar and the Wiessenborn Hawaiian guitar. In 2019, he retired as associate professor of mechanical engineering at Auburn University, where he taught courses in thermodynamics and energy-related sciences.

As an Auburn University student in the 1990s, DeBlanc was part of the Auburn Knights Orchestra and drum major with the marching band. Now working with the university’s computer systems by day, his bass work supports the Auburn-based band Kidd Blue and musicians of diverse styles across the region.

A native of Binghamton, New York, Zuwiyya started drumming at age 13. He played in jazz fusion bands including “In Flight East” which won Downbeat Magazine’s 1987 national fusion competition in Chicago. He currently drums with the Auburn-based band SoulCo. His discography includes two albums recorded in Madrid, Spain with La Coartada (The Alibi) and one with the Auburn Knights. He is a Spanish professor at Auburn University, where he has taught since 1996.

Friday’s concert will be the final one in a series of six. East Alabama Arts director Phillip Preston says the Friday performances could return depending on factors that include funding.

“Whether its the free concert series or other ways to highlight local artists at the Southside Center, private and corporate gifts can make all that possible,” Preston said.

Preston says the association’s other objectives for the coming year include upgrades to the Opelika Center for the Performing Arts and keeping ticket prices as low as possible for its Performance Series which opened Sunday with the Kingdom Choir.

“We want as much community participation as possible, whether that’s audience members or artists and performers,” Preston said. “And that depends in very large part on donations.”