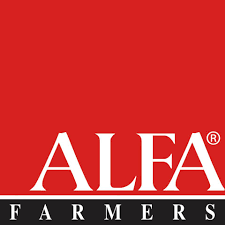 Young farmers cultivated success — and scored more than $80,000 in prizes — during contests at the Alabama Farmers Federation’s 47th Commodity Producers Conference in Chattanooga on Aug. 3.
Luke Smelley won the 2019 Outstanding Young Farm Family (OYFF) competition. Judges visited his Hale County catfish, cattle and hay farm this summer, after finalists were named in March. Smelley and his wife, Lana have five children — Levi, nine, Violet, seven, Everett, four, Daisy, two and Iris, nine months.
Smelley netted a prize package including $35,000 toward a Ford truck courtesy of Alfa Insurance; a John Deere 825i Gator from Alabama Ag Credit and Alabama Farm Credit and a lease on a John Deere tractor sponsored by AgPro, SunSouth and TriGreen.
OYFF runners-up were Ben and Bethany Johnson of Randolph County and Jamie and Lindsey Roberts of DeKalb County. Each family received $500 provided by Alabama Ag Credit and Alabama Farm Credit. OYFF competitors must earn more than half their income from production agriculture.
During the conference, young farmers also competed in Excellence in Agriculture and Discussion Meet contests.
Daniel and Kim Mullenix of Opelika in Lee County won the Excellence in Agriculture competition and will receive a zero-turn mower from Corteva Agriscience and a computer package from Valcom/CCS Wireless. Participants are involved in agriculture but derive the majority of their income off the farm. Fourteen young farmers competed this year.
Excellence in Agriculture first runner-up was Emmanuel Bankston of Headland in Henry County, while Landon and Lauren Marks of Leesburg in Cherokee County were second runner-up.
Four discussion meet finalists were named from 19 contestants — Ellie Watson of Auburn in Lee County, Adam Wilson of Jacksonville in Calhoun County, Brad Cox of Fayette in Fayette County and Kyle Morris of Hanceville in Cullman County. They will examine and problem-solve agricultural issues during the final round of Discussion Meet at the Federation’s annual meeting in December. The winner will receive a four-wheeler from First South Farm Credit.
All Young Farmers contest finalists received iPads from the Federation. Smelley, the Mullenixes and the Discussion Meet winner will compete nationally during an expense-paid trip to the American Farm Bureau Federation’s annual convention in Austin, Texas in January 2020.