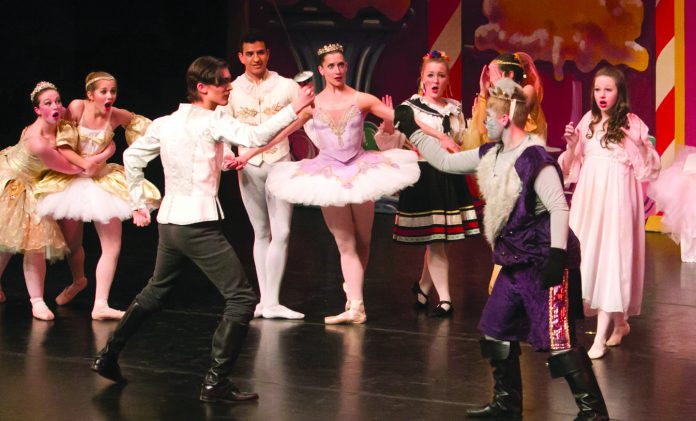 By Kelly Daniels
For the
Opelika Observer

East Alabama Community Ballet will perform its annual production of The Nutcracker this Christmas season, with performances scheduled from Dec. 13 to 15. This year’s production continues an East Alabama tradition that began in 1995 with the dance company’s first production of The Nutcracker.
A Community-Centered Ballet Company
The EACB has grown considerably since 1995.
“Our first Nutcracker was just a few dancers performing at the mall,” said Co-Artistic Director Allie Dyleski.
The company expanded over the years to be able to provide the full Nutcracker experience.
“Over the years, it has developed into a full production held at the Telfair B. Peet Theatre with a cast of almost 100 dancers, professional guest artists, and Auburn University theater student technicians,” Dyleski said.
East Alabama Community Ballet is unique in that it is a local nonprofit organization, run by Lee County residents with a passion for dance and service, that seeks to serve local communities through its performances, dance education and charitable giving.
EACB President-elect Annette Smith described the organization’s charitable contributions, saying that the EACB “sponsors community classes, gives an Auburn university dance scholarship, and presents a dance showcase Turn Out Reach Out that raises money for a local charity (last year we donated to support the Beauregard tornado victims).”
Just as EACB seeks to make a positive impact in East Alabama, the support and enthusiasm of local communities has enabled EACB to grow into the vibrant dance company that it is today.
“Our cast and artistic staff is comprised of dancers and choreographers from five local dance studios, Auburn University, and other local organizations.” Dyleski said.
Local Arts
Education
The EACB cooperates with local dance studios and professionals to promote the appreciation of ballet and to develop local dancers. The company offers a special performance to local third- graders, who are transported to the theater by school buses, free of charge. “As a service-based organization, we love being able to share those qualities with individuals who might not have been able to experience ballet, dance, or art before,” Dyleski said.
In an article published in Time Magazine in 2014, Sarah Begley and Julia Lull state that The Nutcracker has been enormously popular in the United States ever since it was first performed here in 1944. The authors theorized that the ballet has been so popular in part because it appeals to the whole family, providing an opportunity for young people to learn about the art form of ballet.
Clara’s Tea Party, which the EACB’s website describes as “a special presentation of Act Two of The Nutcracker” includes additional amenities for young viewers, including “sweets, treats, and games;” as well as the opportunity to “meet and greet with lead characters.”
The organization also helps local dance students by giving a wide range of age groups, from six years of age to adults, the opportunity to participate in its productions. When asked about the primary benefits of practicing the discipline of ballet, Dyleski said, “I think ballet provides an opportunity to develop artistry, discipline, and a sense of community,” Dyleski said.
Dedicated Cast Members and
Volunteers
Smith said that the dancers in the production begin preparing for the ballet in September and continue practicing until December. “They are always exhausted at the end of performance weekends, but as soon as the performance is over, they are already talking about their roles for the next year,” Smith said. “Strong friendships develop, and they are always so excited to see each other at auditions.”
Participating in ballet has the potential to have a positive impact on the development of young people. According to an article published by the National Endowment for the Arts, experience with art forms, including visual arts, music, and theatre, can help children to develop emotional intelligence, which is helpful in social interactions, as well as skill in regulating their own emotions.
The Nutcracker Ballet
The Nutcracker, which was created by Pyotr Tchaikovsky and first performed in Russia in 1892, centers around the journey of a young girl named Marie and the nutcracker she received as a Christmas present, as the New York City Ballet explains on its website.
Upon falling asleep, the child dreams that she becomes tiny and is transported into a miniature world in which the Nutcracker leads an army of toy soldiers into battle with a legion of mice.
After defeating the evil Mouse King, The Nutcracker is revealed to be a gallant prince. Marie and her prince travel to the Land of Sweets, where they share their adventures with the grateful residents of the realm and their leader, The Sugarplum Fairy.
EACB will perform The Nutcracker at Auburn University’s Telfair-Peet Theater, located at 350 W Samford Ave. on the Auburn University campus. Tickets are $15 and can be purchased through EACB’s website www.eacballet.com/upcoming-performances.php.
Tickets are also available for Clara’s Tea Party for the same price.