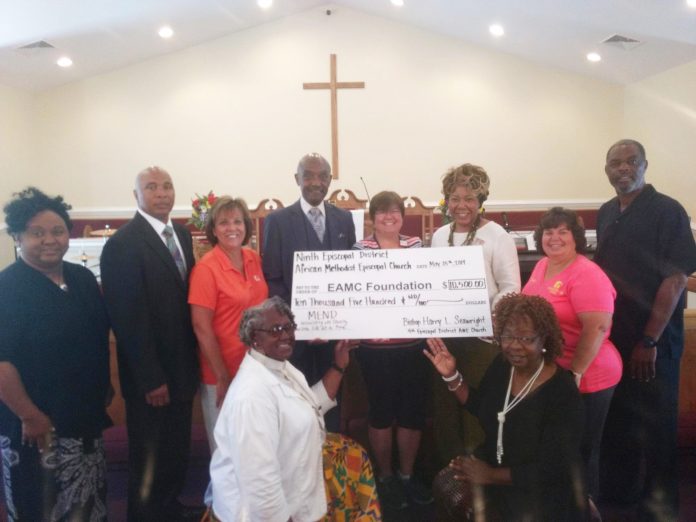 In the immediate aftermath of the horrific tornado that brought incomprehensible destruction to homes, disruption of lives, even death to those in its path, some clergy of the Ninth District African Methodist Episcopal (AME) Church were among the “boots on the ground” ministering to those who were left in shock and awe.
Pastors Debbie Dowdell, Willie Lyles, Mattie Edwards, Joe Benton, Monique Summers, Loretta Fuller and many others were there giving aid and comfort at “ground zero.”
“First, we offered prayer and comfort,” Dowdell said. “Then, I left to go pull good clothes off the racks of my closets to share with those who lost everything.”
Elsewhere, Pastors Kendra Jacobs and Dr. Clementine Warren were organizing and conducting prayer vigils.
Just days later, the resident Bishop of Alabama for the AME Church, Bishop Harry L. Seawright, journeyed from Birmingham to meet with area clergy and laity, for prayer and a first-hand look at the work of rapid responders.
“So often there is a rush to meet needs from the very outset of a natural disaster,” Seawright said after his visit. “However, in the waning days after that, there are always those whose unmet needs are an ongoing challenge. The Ninth District will return at a later date. We will purposefully seek to serve those who will have ‘fallen through the cracks.’ Furthermore, we will seek to fill any voids in the efforts of nonprofits that are continuing to service unfulfilled need.”
On May 25, several area AME Clergy, along with presiding elders Rev. Samuel Smith and Dr. Letitia Williams-Watford, met at St. Paul AME Church in Opelika to present tangible gifts in of $10,500 to two area nonprofits and to several individuals that local pastors identified as having a continued need for relief.
Chaplain Laura Eason, East Alabama Medical Center Foundation, received funds earmarked for the MEND project. These funds will provide cabinetry for 12 homes being built from the ground up in the Beauregard area by the Fuller Center for Housing. A representative of Mayor F. L. “Bubba” Copeland of Smiths Station received funds to be administered by the city’s Disaster Relief Fund. These nonprofit grantees were commended to Seawright by Benton, Lyles and Fuller.
Pastor Mattie Edwards of Lee Chapel AME in Auburn summed up the thoughts of the individual recipients, when she said that anyone experiencing the degree of devastation as these have cannot be reminded too often that the church is here for them.
“I am so happy the AME Church is here to represent the presence of God for some who in such trying times may need to feel God’s presence the most,” Edwards said.
The small gathering opened with prayer. The gathering closed with prayer, but not before survivors representing nine families, each the recipient of a $500 cash grant, lent their voices in an exuberant rendition of “Every Praise is to Our God!”