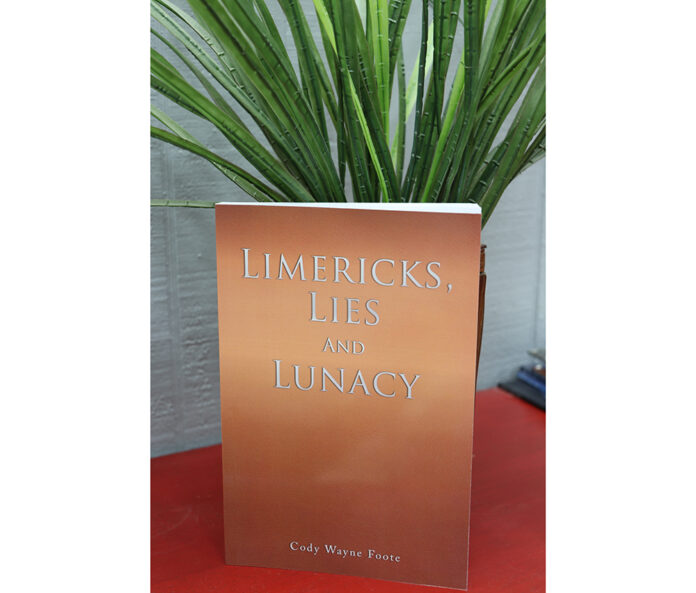 Cody Foote, a former engineer who has a law practice in Opelika, has written his first book, titled “Limericks, Lies and Lunacy.”

The book is a compilation of humorous, spiritually significant or otherwise noteworthy thoughts that Foote has had over the course of the last couple years. At the beginning of that period, Foote decided to start writing down any of these thoughts once they occurred to him. The resultant collection of yellow legal paper was assembled in a briefcase before being recorded in this, Foote’s first book.

He offered the following example of a line he had recently come up with: “If you find that your friends just don’t like you so much, find some that don’t know you so well.” He explained, “I was just watching TV, and all of a sudden, it’s right there in front of me, and I got a pad and wrote it down.”

Foote said that he hopes the book will do more than make its readers laugh. Following a period during which he became obsessed with self-improvement and literature on the topic, he decided that he should share with others what he’d learned.

“All of that whole area about self-improvement, sharing with other people how they can improve their life, help them set goals, help them believe in themselves,” Foote said. “All of those things are still a unbelievably powerful part of me and my psychic.”

He said that when he is talking with somebody feeling down, he can’t help trying to encourage and help that person. “Limericks, Lies and Lunacy,” he hopes, is a way to do that through the written word. “I am delivering that message hidden in jokes, poems, witticisms, pundits, jabs… it’s all mixed in all this other stuff,” Foote said.

There will be a book signing at Maria Jewelers this Saturday, Nov. 14, from 10:30 a.m. to 4 p.m. Foote will be selling and signing copies of his book, which became available earlier this week on Amazon’s and Barnes and Noble’s websites. One can also order it from Xulon Press for less than it will cost from either of those other two.

Foote said one of the first reviews he heard of his book was, “When I finished the book, it made me feel good.” He added, “If that made at least one person feel that way, and nobody ever says a nice word about it, it was still worth writing.”