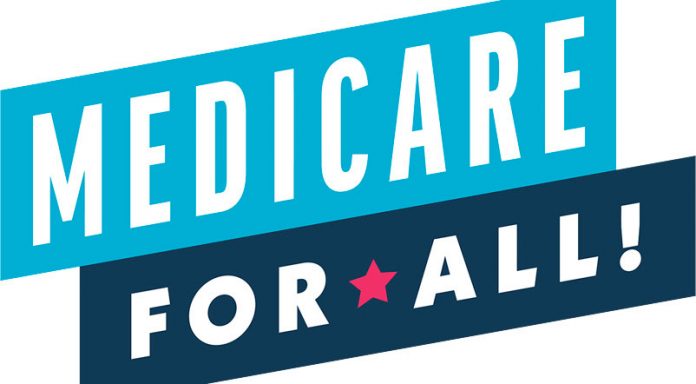 Dear Editor,
The first thing I noted about the above named article is that it cited no sources for any of the assertions that were made. In only one case did the article mention “One study estimates”, but with no specific citation.
Per the National Center for Health Statistics, total yearly healthcare spending for the US is $3.3 trillion. Several studies, such as one by UMass, have shown that Medicare for All, as described in HR 676: The Expanded and Improved Medicare for All Act, would save as much as $597 Billion per year, mostly from the bargaining power over pharmaceutical and hospital corporations of a single payer and elimination of the 15% private insurance overhead (to pay people who’s job is to deny you healthcare). Medicare overhead is about 2%.
According to the Organization for Economic Co-operation and Development (OECD), also known as the 1st world industrialized countries of the world, the US spends 17% of GDP on healthcare, the highest of any OECD country. We also have the 11th worst outcomes (only ahead of countries like Estonia, Turkey, Poland) and 3rd highest child mortality rate (after Turkey and Mexico). We spend 2.5 times as much per capita as the average of all OECD countries and 40% more than the next most expensive country (Switzerland).
Currently, doctors’ offices are burdened with dozens of different private insurance company forms in order to get reimbursed – all with different sets of network providers, deductibles, co-pays, procedures not covered, maximum payout limits, etc. These are all bureaucratic tasks forced on doctors and their staffs by private insurance corporations. No wonder they report high burnout rates!
With Medicare For All, there is only one form, and yet, the Pipes article states that it would “smother doctors in new bureaucratic tasks,” just the opposite of what is proposed in the bill.
With Medicare for All, insurance premiums and all out-of-pocket expenses are eliminated. Your health care is not dependent on your job. You will not lose it if you decide to change jobs. Everyone is covered. If you get sick, you go to the doctor and get treated.
Medicare For All is funded by a steeply progressive income and wealth tax – the rich pay the bulk of the costs because they can afford to, unlike current tax policy, where the middle class pays all the taxes and the rich get all the tax breaks.
Oh, and one other fact about the current U.S. healthcare system: we are the only OECD nation that does not have some form of government-subsidized basic healthcare plan for all.
We are also the only OECD nation where people have to take up collections at the check- out line, or have to ‘go fund me’ because family finances are decimated after a catastrophic medical event. We are the only OECD country where up to 50% of bankruptcies are due to catastrophic medical expenses, even for folks who thought they had medical insurance. In the other OECD countries, this is eliminated.
Next time you talk to your Congressperson, ask them why you can’t have the same health plan they do.
Claude Crider
Auburn, Alabama
Publisher’s Note: Links to articles referenced can be requested by emailing editor@opelikaobserver.com.

Getting our feet wet