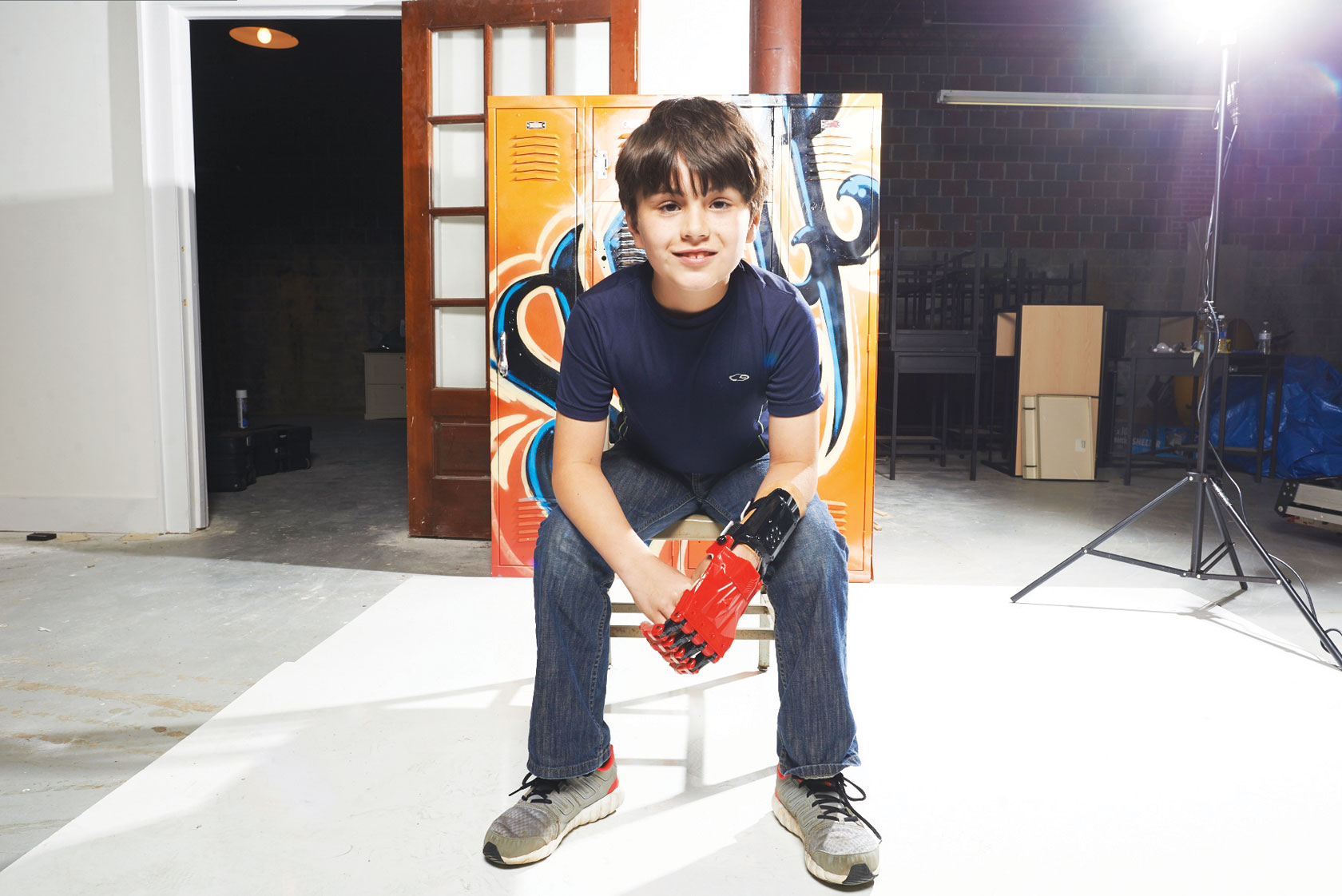 Northside Intermediate School’s Ethan Falco High is an ambassador of America’s Digital Age frontier, advocating for and demonstrating 3-D printing and robotics testing for prosthetic limbs.
High was born with Amniotic Band Syndrome, a condition which occurs after a baby becomes entangled in the amniotic bands in the womb, constricting blood flow and altering the baby’s development. The result can be half-developed or completely missing limbs, depending on which part of the baby’s body that was constricted.
During his mother’s pregnancy, High’s two middle fingers on his left hand did not develop properly, and he grew up having the use of only three fingers. High’s mother, Melina Brown, said that his condition  has never slowed him down.
“We’ve always taken the stance that nothing is wrong with him, and he hasn’t and doesn’t want to use his condition as an excuse for not being able to do something. He may have to try harder to achieve something than most people do, but he can do anything anyone else can do if he tries hard enough,” Brown said.
In his early school years, High was the victim of name calling and bullying, and after a while, he began to wonder if there were other kids who faced the same daily issues and struggles that he did.
“One afternoon while I was on my computer, Ethan came up to me and asked me if there were other kids like him that had ABS, and we looked and found all sorts of support pages,” Brown said. “Seeing all these kids that had ABS too really helped show him that being different isn’t so different because there were lots of kids just like him.”
While searching through comments on one of the support pages, Brown said she saw comments stemming from a post by a man named Jon Schull, founder of a company called e-NABLE.
According to information provided by the e-NABLE website, the U.S. based company is made up of volunteers from all over the globe who help to conceptualize, finance, construct and distribute artificial arms or hands to those who need them, free of charge.
Brown researched and read information about Schull’s company, and she contacted him to inquire about obtaining an arm for her son.
High said the hand was ‘’life changing,’’ and he began to be more socially accepted.
“I think after people had a chance to see my hand and watch me use it, they started to accept me more. Actually, they thought it was cool,” High said. “They realized that I wasn’t different but much like them. Having an artificial hand isn’t my fault, and I’m not weird or different.”
Impressed by the company and their willingness to help her son, Brown began to volunteer for e-NABLE.
“After we contacted e-NABLE about a hand for Ethan, I received a call from them, asking for volunteer help, specifically matching families to volunteer e-NABLE members who actually manufactured the hands,” Brown said. “I decided to volunteer a little, then that snowballed into a lot.”
Shortly after, Schull and the other volunteers saw a need for e-NABLE to form a legal entity for the company, so the legal offshoot of e-NABLE, the Enable Community Foundation, was founded in the spring 2014.
After High’s mother started working with the foundation, he joined in too, fulfilling the roles of tester, demonstrator and 3-D printing advocate on behalf of e-NABLE and other companies who are involved in this growing scientific realm.
“I started volunteering for the foundation right after my mom got involved in it, when I was eight,” High said. “I help demonstrate how the hands work, test the hands to see if they’ll be able to stand up to normal use by a child, and by doing this, I help people understand why people need these hands and how it can make their lives better.”
High, now 10 years old, has traveled the globe for e-NABLE, and most recently, returned from a trip to Dubai. On this trip, he demonstrated the hands on a local television network.
“Dubai was fun, but we did have to work,” High said. “Besides getting to meet people and show them the hands, the best part was getting to see the view from the top of the Burj Khalifa and take some photos.”
High is currently enjoying summer break and preparing to start fifth grade at Northside Middle School in the fall, but he said he already has future plans.
“I really want to keep helping kids like me have better lives. I want to keep working with e-NABLE and one day design hands of my own for people,” High said.
Brown and her administrative assistant Sarah McKenzie operate the Opelika branch of the Enable Community Foundation at Roundhouse in downtown Opelika, and Brown said she is excited for both herself and e-NABLE.
“The Google Plus community where most of the e-NABLE volunteers are active is thriving, and we have nearly 9,000 members now,” Brown said. “It’s great to see this company grow and be associated with something like this with the primary goal of helping people.”
But, more than anything, she is excited for her son’s future.
“Ethan has come such a long way, in both his self-esteem and maturity,” Brown said. “He is a determined little child that doesn’t let things hold him back. The glory of this is, while he gets to do some cool things that most kids his age don’t get to do, he is making an impact – an impact for good on the lives of children everywhere. I believe his purpose in life is to make people’s lives better.”
For more information about e-NABLE to become a volunteer, go online to their website at www.enablecommunityfoundation.org.